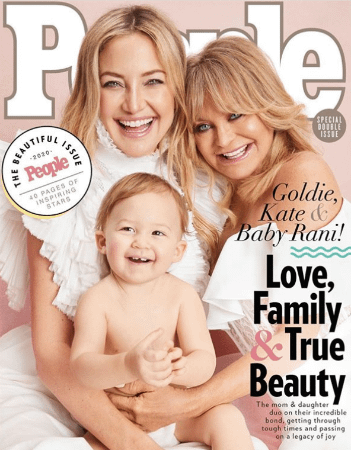 –Goldie Hawn, her daughter Kate  Hudson and granddaughter Rani Rose are the first multigenerational group to appear on People’s annual “Most Beautiful” issue.

-SNL’s Cecily Strong, who lost her cousin, shared a powerful essay on what it’s like to grieve in quarantine.

–Tom Holland helped Jimmy Kimmel’s three-year-old celebrate his birthday by surprising him with a message from Spider-Man.

–Chris Evans getting in on the Stanley Tucci love is adorable.

-Eek. Ellen Pompeo is usually pretty woke but this video that’s been circulating today is a bad look.

–Halle Berry says she nearly died on the set of 2002’s Die Another Day. “I am supposed to be trying to be all sexy with a fig — and then I end up choking on it. And [Pierce Brosnan] had to get up and do the Heimlich. So not sexy, so not sexy. He was there for me, and he will always be one of my favorite people in the whole world.”

-I’m pretty done with Star Wars IP for awhile, but good on Russian Doll’s Leslye Headland for developing a SW series at Disney Plus.

-I haven’t loved Hulu’s Little Fires Everywhere, mostly because the characters in the book were very understated which made their systemic white privilege so insidious whereas in the show Reese Witherspoon and Kerry Washington are chewing through scenery like every line will be part of their Emmy reel. But the finale (which veers widely from the book’s ending) was quite affecting.

-The end of Empire — which was forced to wrap up two episodes earlier than planned when the pandemic shut down production — did well in the ratings. Meanwhile, Taraji P. Henson told EW: “As an artist, to not be able to finish something that you started, that hurts me. I feel incomplete. I don’t ever start something and don’t complete it. And so, for me, it’s deep; I have to finish, or this will haunt me for the rest of my life and career.”

-I kind of love that Pink is crowd-sourcing all of her baking dilemmas.

-Film Twitter is full of bad takes, and the one that circulated yesterday about There Will Be Blood was a doozy. Don’t let film bros make you hate a movie you like. But also, don’t hate on it just because film bros love it.

–Mandy Patinkin‘s son quizzing his parents on texting abbreviations is exactly what I needed to watch today.

-Hollywood is starting to make plans for what TV and movie productions will look like once they re-open.

-A little over five percent of the 135 features originally selected for SXSW 2020 have opted in to stream on Amazon Prime from April 27-May 6.

-The novel Normal People didn’t knock my socks off the way it did with others, but Hulu’s adaptation is getting gushing reviews so maybe I’ll like the TV version better?

-Whew, this trailer for a new Netflix documentary hit me right in the heart guts.

Rihanna On Chris Brown: “If It’s a Mistake, It’s My Mistake”

Cory Monteith Gets Love From Glee Costars After Entering Rehab