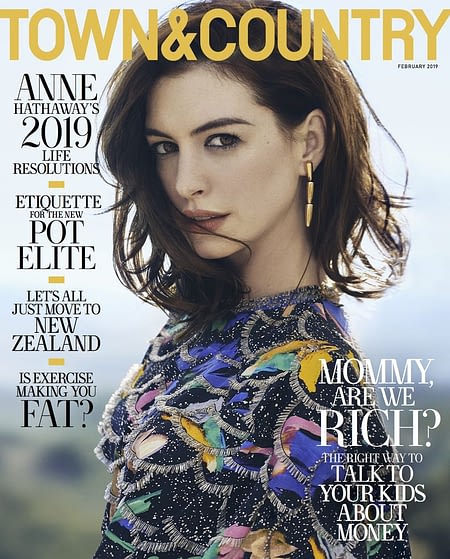 –Anne Hathaway covers the latest issue of Town & Country, in which she reveals that she may be the first person in the world to be calmed down by social media.

-The Surviving R Kelly showrunner said she was waiting for a reckoning and it might finally be here. TMZ reported that the Fulton County DA’s office has opened a criminal investigation into R. Kelly “as a direct result” of what was in the Lifetime docu-series. Plus, there’s a warrant out for his manager’s arrest for “threats” to the singer’s accusers dating back to July 2018.

–Mahershala Ali, who doesn’t drink, says Bill Murray poured tequila on his head at the Golden Globes. He’s much more pleasant about it than I would be.

-I finally saw Spider-Man: Into the Spider-Verse, and it was as good as everyone said. Brian Tyree Henry was on Jimmy Kimmel Live last night and talked about how his family missed his big scene because they went to get chicken tenders.

–Gordon Ramsay is facing backlash after an old interview with Sofia Vergara resurfaced. While the Modern Family star is being interviewed by host Jay Leno, Ramsay consistently interrupts, makes jokes about Vergara, and at one point touches her leg.

-This timeline of Ruth Wilson’s abrupt exit from The Affair is fascinating, but I still don’t get what happened.

-Can you imagine going to Target and seeing Beyonce there? I’d die.

-The guy who plays Chidi on The Good Place is so surprisingly hot.

–Winona Ryder calls Keanu Reeves “husband” when she talks to him and I’m here for it.

–Jimmy Kimmel is employing federal workers during the shutdown, starting with putting a prison worker on a trampoline.

-Brooklyn Nine-Nine is returning and critics say the NBC version “is just as goofy, warm, fast-moving” as it was on Fox.

-Also returning this week is You’re The Worst, which is reportedly much improved from last season.

–Ethan Hawke moonwalked his way onto The Late Show.

–Ryan Gosling wants consumers to make informed choices about the materials from Congo used to build things like smartphones.

-Speaking of Gosling, THR did a story on club promoters in the early 2000s, and this photo of him with Britney and Justin is amazing.

–Pamela Adlon talked making the new season of Better Things without Louis C.K.  “All of a sudden, he’s gone, my show is dangling from a precipice. It was so huge. And it was so devastating…I’ve never been in a writers’ room, let alone run a writers’ room. Sitting down, meeting writers, reading their stuff—how do you do this? Is this person going to get along with this person? It’s like making a table at a f*cking Bar Mitzvah.”

-The GoT prequel has rounded out its main cast. Hey, it’s the dude from Reign!

-Paradise Hotel is returning to Fox. That show’s first season remains one of the wildest, most entertaining things to ever air.

-A much younger Agent Coulson is back in the new Captain Marvel trailer.