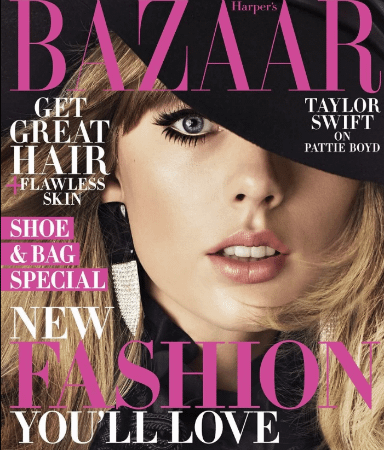 –Taylor Swift is on the cover of the new issue of Harper’s Bazaar — but she’s not interviewed. Instead, the suddenly press-shy pop star is the one asking the questions, interviewing musical muse Pattie Boyd. This is a pretty brilliant way of staying in the spotlight without having to answer any personal questions.

–George Clooney was injured today after his scooter was hit by a car on the Italian island of Sardinia. (He has already been released from the hospital.) Clooney was driving 60 mph when he was thrown from his bike and traveled 20 feet in the air before hitting a car’s windshield; his helmet shattered on impact. PROTECT HIS FACE!

-The fact that Dwayne Johnson has fully embraced the fact that the internet calls him “Daddy” makes me very happy.

–Justin Bieber posted a very long, very gushy Instagram post about getting engaged to Hailey Baldwin. “The thing I am most excited for is that my little brother and sister get to see another healthy stable marriage and look for the same!!!..My goodness does feel good to have our future secured!” Sure thing, bud.

-Meanwhile, Baldwin joked that she doesn’t want him to regrow his moustache for the wedding, which makes me like her.

-I missed almost all of these hidden words in the Sharper Objects premiere. Also, I’m really glad I’m not the only one who had to watch it with closed captioning on. Speak up, y’all!

–Jonathan Rhys Meyers was briefly detained at LAX following an alleged verbal altercation with his wife on an American Airlines flight. His wife has since posted an apology on Instagram. “Eight months of sobriety and an unfortunate day of airline travel. We were in South America specifically working holistically through anger issues that result in these kinds of episodes. When in it…he is not in a frame of mind where he can really even comprehend the repercussions and necessary response to his own actions.”

-Who the hell wants to drink Handmaid’s Tale wine? Not everything needs a product tie-in, Hollywood.

-Maybe Rihanna and Hassan Jameel are fighting in these photos. Maybe she’s just animatedly telling him about the plot of Killing Eve. It’s hard to say (but the internet is say it anyway.)

–Rosario Dawson, who fielded a lot of broadcast pilot offers, has signed on to star in USA Network’s Briarpatch from Mr Robot’s Sam Esmail and podcaster Andy Greenwald. I’ve been listening to Greewald since his Grantland days and even though I don’t know him, I’m weirdly proud of him for this. “Great job, Baranski!”

–Chris Evans continues to win Twitter (this time with an assist from Billy Eichner).

-Thanks to the success of comedy specials from the likes of Hannah Gadsby and Ali Wong, Netflix is preparing to debut a ridiculous amount of stand up shows in 2019.

-Speaking of Hannah Gadsby, I just discovered her art history series on YouTube. She’s the best!

–Tyler Perry surprised Tiffany Haddish with a new Telsa because she kept talking about getting one, but then wouldn’t do it. He told her “what I’ve learned is that it’s OK to spend a little bit.”

-Everything about Amy Poehler and Nick Offerman‘s new craft show seems adorable, including this promo clip in which they have a craft-themed pun-off.

-Now Nick Cannon has chimed into the Kevin Hart vs Mike Epps feud.

-Pretty much everyone who was part of Step Brothers came together for this oral history on the movie.

–Roseanne Barr says she dropped out of a tell-all TV special and will now interview herself on YouTube.  (It’s unclear whether she ever had an interview booked with any TV network in the first place.)

-Apple continues to sink money into their upcoming TV offering, getting Jason Momoa to star in its futuristic drama See.

(Random note of randomness: I’ll be making some updates to the site design this week to make it more mobile-friendly. Please bear with me!)

-This Is Us creator Dan Fogelman‘s next tear-jerking project is Life Itself, a multi-generational drama that sees Olivia Wilde and Oscar Isaac falling in love. It also stars Antonio Banderas, Annette Bening and Mandy Patinkin.

Madonna Opens Up to Howard Stern About Tupac, Guy Ritchie and More

The New Maleficent Trailer Heavies Up on Angelina Jolie