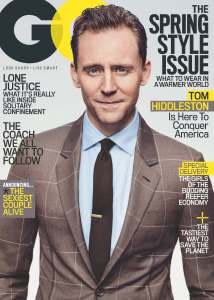 -There are certain profile writers that are so good, you know you’re going to love the article the second you see their byline. Taffy Brodesser-Akner is one of those people. Her Tom Ford profile slayed me, and now she’s back again with a GQ cover story on Tom Hiddleston. She asks him about the infamous Taylor Swift tank top, and her asides are even better than his response. (He is definitely, without a doubt, someone who would put on an “I ♥ T.S.” tank top, both to protect a scratch from sun damage and to make his new friends laugh while th—wait, sorry, he’s still talking…He still isn’t looking at me. The last piece of my steak is now poised on his fork in mid-air. He is so sad, and I can’t take it anymore, so I put my hand on his and I say, “Tom, Tom, it’s okay. You don’t have to talk about the tank top anymore. I got it. I understand. I’ll tell the world.” But he can’t stop talking about it. He literally cannot stop talking about it.)  Perfection. Go read/devour the whole thing.

–Chrissy Teigen was in a car accident but she’s already tweet-joking about it so it’s all good.

–Justin Timberlake‘s THR cover story is all kinds of insufferable. I especially like the part where he talks about *NSYNC ending: “I felt like I cared more about the music than some of the other people in the group.”

–George Lopez called a woman a “bitch” after she wouldn’t put up with a racial joke in his act. Swell.

-This is very cute: Milo Ventimiglia was shooting This Is Us on location and he saw through a window that a neighbor was watching the show, so he knocked on their door.

–Janelle Monáe teaches us to how to tie a Windsor-knot like a boss.

-If Feud’s opening credits are any indication, this show is going to be so, so good. (I can’t wait for this show. Did you know that when Bette Davis was nominated for an Oscar, Joan Crawford sent letters to all the other nominees in that category saying that in case they couldn’t make the awards ceremony, she’d gladly be there to accept for them? And then she did!)

–Kate McKinnon is ready to climb on the Magic School Bus as Miss Frizzle, which is pretty brilliant casting.

-Legion premieres tonight! I hope it lives up to all the raves it’s getting.

–Jack Nicholson and Kristen Wiig are set to star in a remake of Toni Erdmann. This…seems like a mistake.

-I caught up with Jane the Virgin, which was a total gut punch — but so good for the show.

-Netflix’s new show Girlboss is supposed to be amazing, but this promo of a dancing Britt Robertson isn’t really selling me on it.

–Selena Gomez talked about her “difficult time” while working on Netflix’s 13 Reasons Why.

-With a new 15-second teaser, Netflix announced Orange Is the New Black’s premiere will be on June 9.

–Channing Tatum is launching a vodka line because he wants to “cause a little havoc.”

Here’s the First Footage From The X-Files Reboot