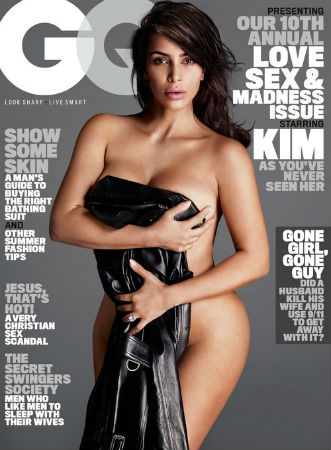 -Despite my disdain for all things Kim Kardashian, I do find her interviews to be fascinating. Ignore all the nipple shots in her latest GQ cover story and focus on the juicy tidbits — like how the interviewer can barely sit through a 2-minute mind-numbing phone call between her and Kanye, or how she casually mentions that she went through the bag her dad removed from OJ Simpson‘s home during his arrest and that she didn’t find a murder weapon, or how Taylor Swift‘s rep drops the ultimate clapback statement: “Taylor does not hold anything against Kim Kardashian as she recognizes the pressure Kim must be under…Taylor cannot understand why Kanye West, and now Kim Kardashian, will not just leave her alone.” Jesus Christ, that’s good.

-And of course, immediately there’s rants about why we’re dumb to care about this cover story and celebrity culture in general. Luckily, there’s also already some thoughtful replies.

-Speaking of the Kardashians, OJ Simpson is reportedly ready to take a paternity test for Khloe.

-Why yes, GOOP. I *would* like to take a peek inside Gwyneth Paltrow’s NYC apartment! The photos are so nice that it almost makes up for the fact that they used the word ‘artisinal’ twice in the first sentence– or that elsewhere in this week’s edition she recommends $70 shampoo.

-Also, I’m a gonna need someone to explain Gwynie’s latest outfit to me.

-Congrats to Ashton Kutcher and Mila Kunis, who are expecting baby No. 2.

-What we didn’t see in the Red Hot Chili Peppers edition of Carpool Karaoke: Anthony Kiedis helped save a baby.

–Spice Girls might replace Sporty and Posh on tour? Someone hug Emma Stone.

-In China, Warcraft isn’t just doing better than it did in the U.S; it’s breaking records. Which means that movies can now be total flops domestically — and studios won’t care.

–David Duchovny says he knows the X-Files revival’s problem was: there was not enough of it. Um yeah, that wasn’t it.

–Stephen Colbert made a life-size Liam Hemsworth “doll” for you to admire, but it’s not for sex!

-Someone actually found a use for Spencer Pratt: employing the expertise he gained from his gross, PR-hungry life to comment on staged photo ops. It’s actually pretty insightful.  “That’s Angelina-Brad Pitt 1998-type shit.”

-Guys, I just found out about the Taylor Swift conspiracy ring that’s convinced she’s secretly gay and now I want to read about nothing but this forever.

-Supergirl has just found their new Superman: Tyler Hoechlin. I have a friend who tried to convince me to watch Teen Wolf based solely on this guy. I…did not.

-I like Amy Schumer’s Vogue cover way better than her Vanity Fair cover. (Speaking of Amy, I’ve been catching up on her show and watched one yesterday that featured Jake Gyllenhaal, Josh Charles AND Sam Rockwell. If I had fame, that’s exactly what I would be using it for as well.)

–Lin Manuel Miranda just launched a merchandise site to support the victims of Orlando. Also, he confirmed that he’s leaving Hamilton in July but tweeted: “We’re filming the original cast before I go. WE GOT YOU.”

-Early reviews suggest the new season of OITNB starts off rough, but pays off in its second half.

-Good Morning America had footage from the Ugly Betty cast reunion and it was awesome!

–Orphan Black is ending. But we already knew that it was only supposed to run for five seasons … but I was worried the network would try to bleed it dry. I’m trying to watch this season and even though it’s better than last, I still have no freakin’ idea what’s going on.

-She may be the thirstiest celeb, but I kind of want to hang with Emilia Clarke. Probably because of that.

-This teaser for Pixar’s newest short is beyond adorable.

-God bless The Toast for giving us a ‘If Oscar Isaac Was Your Boyfriend’ article before shutting down. I don’t know why, but this is the part that got me right in the heart guts: “If Oscar Isaac were your boyfriend, sometimes he’d jokingly call you his ‘problematic fave.'”

–Jamie Dornan and Cillian Murphy are in a new movie together and I don’t even care about the plot so I’m just gonna watch this trailer on mute, k?