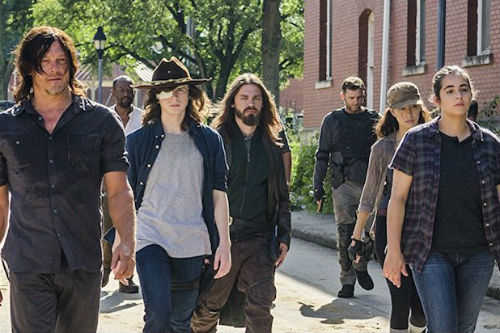 -I stopped watching The Walking Dead last year (best. decision. ever.) but Twitter went wild over last night’s big death. Also not impressed? The star’s dad, who slammed the showrunner: “Watching Gimple fire my son 2 weeks before his birthday after telling him they wanted him for the next 3 years was disappointing.”

-Meanwhile, Andrew Lincoln is talking about how his contract is up this season and has yet to be formally renewed for season nine.

-It’s been kind of amazing to watch stars like Chris Evans, Mark Ruffalo, Justin Bieber, Hailee Steinfeld and more rally around that kid who was bullied. But now there’s controversy surrounding the boy’s mom following allegations that she’s made racist posts on Facebook. It does make you wonder why certain stories go viral — and others don’t.

-Last night word broke on Twitter that a celeb chef would be the latest famous dude to fall, with Anthony Bourdain adding “Monday is really going to suck.” Fellow chef Tom Colicchio tweeted “And no one should be surprised.” Then this morning came the news that Mario Batali has been accused of sexual misconduct by multiple women. His response: “Although the identities of most of the individuals mentioned in these stories have not been revealed to me, much of the behavior described does, in fact, match up with ways I have acted.”

–Jessica Chastain says a famous dude chastised her for tweeting  when the Weinstein scandal broke. “I was tweeting a lot at the time and actually got an email from a well-known actor that said, ‘Calm down.'”

-A source says that Matt Lauer is “weak and broken and ashamed” after his firing. I love this song.

-Another woman has come forward with allegations of being groped by Dustin Hoffman.

-To do a Spacey-free season, Netflix had to toss most of two completed episodes and about 5-6 finished scripts.

-I seriously wish Tiffany Haddish was contractually obligated to be a talk show guest every week. Her story about dating a one-armed man slayed me. “Does he live with the X-Men?”

-The Golden Globe nominations are always weird, but there were some nutso snubs in this morning’s announcement. On the movie side, no Wonder Woman or The Big Sick or Tiffany Haddish. Over on TV, no Veep or The Leftovers — but Jessica Biel somehow managed to slide in there?

-Only five women have ever been nominated for the Golden Globe for Best Director in its 75-year history. This year, women were shut out once again. I really thought Greta Gerwig was a shoe-in.

–This video of Alison Brie finding out about her GG nom on the set of Glow is pretty great.

-Netflix calling out the 53 people who’ve watched A Christmas Prince 18 days in a row is a bit squicky.  Not only does it reveal that they’re tracking us in a big brotherly way, why are they going after their (most likely) female fans? Squicky, I tell ya.

-Netflix revealed their end-of-year data, and you all watched a LOT of American Vandal. Which is odd, because I feel like it didn’t get a lot of coverage.

–This X Files promo with the stars trying to explain Mulder and Scully’s relationship made  me laugh. (“I’d say were kind of back to where we were originally but without the unresolved sexual tension… Because we’ve already had sex.”)

-Whoo hoo! Atlanta’s season 2 returns to FX in February of 2018. I really thought we’d have to wait another year for this one.

-On the flip side, Sophie Turner says Game of Thrones season 8 won’t premiere until 2019.

-Previously.TV is doing old-school, Television without Pity-style recaps and I am SO HAPPY. (And I don’t even watch this show!)

-The trailer for Jessica Jones Season 2 looks wonderful.  It drops March 8, and all 13 episodes were directed by women.