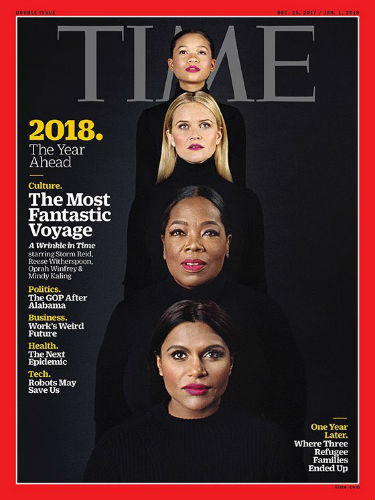 -Is Brad Pitt getting ready to debut a new girlfriend?

-Wow, the backlash to The Last Jedi came hard and fast. Most of the criticism I saw on Twitter was about its failure to answer questions The Force Awakens raised, which is just a big shrug emoji for me.

-Also, I really liked this article on Rey and Kylo (and I can’t believe that people are actually shipping them).

-Speaking of ships, here were the top 5 shipper moments on TV this year.

–Sophia Bush opened up about her shocking exit from Chicago P.D. I love this part: “[I told them] I’m giving you 23 episodes notice. I’m giving you that much time. So there will be no conversation in which I was hysterical, emotional, in which I was being a quote irrational female or whatever you want to put on it. I’m literally sitting in front of you like cool as a cucumber. If this has to be like a big swinging d— competition, I promise you I will win.”

-You know a TV episode has gone off the rails when the star of Riverdale has to reassure fans that she was was fully involved in a striptease scene.

-Hollywood has clearly run out of ideas. NBC is eyeing a revival of The Office, with a mix of old and new castmembers.

-This gallery of Prince Harry as a third wheel made me laugh.

–Rose McGowan  dragged actresses like Meryl Streep for planning to wear black in protest at the Golden Globes, and then Amber Tamblyn dragged Rose for dragging Meryl, and then Meryl was like “um, what’s with all the dragging?” I don’t disagree with Rose that the black dress this is kind of pointless. I like the suggestion that a big name actress take the founder of #MeToo as her date.

-The director of Bad Santa has come forward to say he was also discouraged from hiring Mira Sorvino. Can she sue Miramax for damages?

-Here’s a great suggestion: hire women whose careers were destroyed by Weinstein.

-God good, how has no one stopped Matt Damon from talking yet?!? Now he’s saying that when it comes to whether or not he’d work with someone accused of sexual misconduct: “You know, it would be a case-by-case basis.” He also insists we aren’t talking enough about men in Hollywood who aren’t predators. GAH!! He needs a time out.

-This is a great read on how Hollywood’s sexual offenders should face the law. This was the one thing that struck me about Damon’s initial comments (beyond being fed up with men’s knee-jerk reaction to immediately feel the need to qualify/rank offences, as if misconduct isn’t all stemming from the same systematic, power tripping issues), was his comment about how Louis CK has already paid such a “price” that Damon is sure he won’t do it again. What price? The loss of a career (that btw was a privledge, not a right?). That’s not a price, that’s a consequence. Dude exposed himself to unwilling participants. That’s a criminal offence. He should be rejoicing for escaping jail time.

–Mario Batali sent an email apology for his “wrong” behavior that included a link to a recipe for cinnamon rolls in the same email.

-Actress Amy Smart is defending husband and HGTV star Carter Oosterhouse after he was accused of sexual misconduct.

–Jason Priestley recalled the time he punched Harvey Weinstein in the face at a Golden Globes afterparty in 1995.

-When Kate Winslet started talking about working with Woody Allen during the LA Times roundtable, the faces Margot Robbie and Jessica Chastain made were priceless.

–Terry Crews took to Twitter on Friday to accuse William Morris Endeavor (WME) of “retaliation” and spying on his family during his ongoing legal battle with the agency.

–Nelly wants to take legal action to clear his name after rape case was dropped.

-Amazon just passed on all three of its pilots from the fall season. That’s depressing.

-Watch Jodie Foster reprise her Silence of the Lambs role to investigate Trump-Russia ties in a Late Show skit.

-Director Tracy Letts says everyone was nervous on the set of The Post, except Carrie Coon. “She just has ice water in her veins. She’s like an assassin. She’s the one person who was not nervous, and I think everybody found that a little disconcerting.” God, I love her.

-I totally forgot that one of the girls in Parenthood once convinced all of her costars to be in a music video, and even got Michael B Jordan to rap in it. It holds up.

–Rachel Bloom installed a ball pit in her house and she’s my new hero.

-This is a very cute clip of a guy who proposed with Neflix’s help. “Drew Barrymore said my name!”

-This clip of Michael Shannon on At Home with Amy Sedaris is everything.

-The Ocean’s 8 trailer drops tomorrow but here’s a 15-second teaser. Are they eating at Veselka? God, I love this movie already.