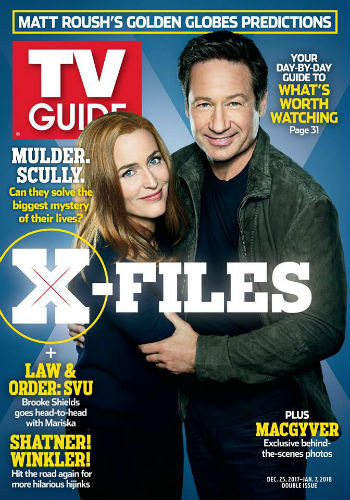 -I can’t stop looking at Gillian Anderson‘s wig and David Duchovny’s eyes on the cover of TV Guide. It’s going to distract me during the whole upcoming season, isn’t it? In the interview, they talk about William, their characters’ complicated relationship, and what comes next.

-Congrats to Mindy Kaling, who welcomed her first child, a baby girl she called Katherine. I love the normal name, and I especially love that she feels no need to tell us who the baby’s father is.

–Janet Jackson is  back together with Jermaine Dupri? It’s a Christmas miracle!

–Vanessa Hudgens isn’t engaged, she just wanted to show off her new haircut and didn’t realize the world would focus on the giant rock on her finger.

-The floodgates have opened when it comes to bad TJ Miller stories. A transgender movie critic revealed an angry email from him, a woman told a story about him acting so shady a bartender wouldn’t let her have the drink he was hovering around, and adult film star Dana DeArmond has accused Miller and Kong: Skull Island director Jordan Vogt-Roberts of sexual harassment on the set of Comedy Central’s Mash Up.

-Meanwhile, Miller’s The Gorburger Show has been canceled by Comedy Central (though a network rep claims that the decision predated the allegations, with one source noting it happened as far back as July).

-Last week, the Today Show beat Good Morning America for the third week in a row — which lines up directly with how long Matt Lauer has been gone from the show. Meanwhile, CBS This Morning has held steady in the ratings since Charlie Rose‘s departure.  It’s almost as if these garbage men weren’t worth the millions they were being paid.

-Just because the world can’t stop blaming women for men’s predatory behaviour, Meryl Streep is being targeted by street artists with “She knew” posters. Someone wake me up when they use Matt Damon’s image instead.

–Christian Bale says Hollywood would be better if “white dudes” weren’t in charge of anything. Well, at the very least there would probably be less actors who feel free to aggressively yell at hapless crew members in a long, expletive-laden rant for daring to walk in their eyeline. Or actors who are arrested for assaulting their mother and sister.  Sit down, sir.

–Mark Ruffalo just bought the world a coffee. I love him.

-I really liked this Twitter thread, which pushes back on The Last Jedi’s backlash.

–Anna Kendrick remembers having to style herself for the Toronto premiere of Up In The Air. “I was not famous so no one wanted to lend me shoes to wear, but I was broke so I couldn’t buy the shoes. I got talked into spending the money I really didn’t have on a pair of Louboutins. I never wear them but I will never get rid of them because I’m like ‘I spent my rent money on you!'”

-The former Pentagon official profiled in the NYT’s insane article about the secret branch of gov’t investigating UFOs is now working for Blink 182’s Tom Delonge. What is 2017??

-Here’s the trailer for BBC One and Hulu’s “pre-apocalypse” series, Hard Sun. It’s from the creator of Luthor and stars Jim Sturgess and Agyness Deyn, so I’m all the way in.