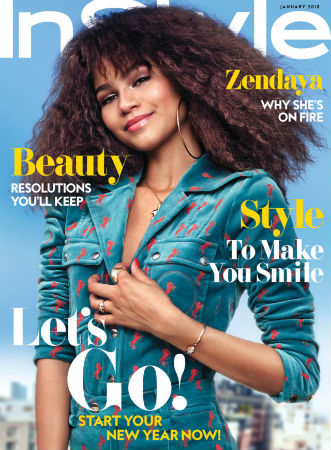 –Zendaya looks amazing on the cover of Instyle. Is there nothing she can’t pull off? (Oh wait, I just saw the horse dress. Never mind.)

–Ben Affleck reportedly rented an Upper West Side apartment for Lindsay Shookus that costs $28,000 a month. But isn’t she an SNL producer? Couldn’t she rent her own apt?

-This article about how Meghan Markle is everything Ivanka Trump wishes she could be is just perfect. *chef’s fingers kiss*

–Selena Gomez is the most followed person on Instagram — and she just switched her account to private.

-God bless Vulture for diving deep into an investigation on the muscular Korean guy spotted with Lindsay Lohan.

–Beyonce and Jay-Z are just messing with us at this point.

–Katherine McPhee crashed a wedding and then reportedly called the bride a “loser” for kicking her out. Charming.

-Filming was suspended on Blake Lively‘s new movie after she hurt her hand.

-Every year, IndieWire’s David Ehrlich does a 13-minute montage of the year’s 25 best movies. I missed so many!

-God bless John Oliver for grilling Dustin Hoffman over sexual harassment allegations and refusing to back down. When Hoffman starting to say “Well, there’s a point in her not bringing it up for 40 years” I actually yelled “NOPE!!” out loud. (Oliver’s reaction of “Oh, Dustin” and putting his head in his hands was probably better.)

-Also, according to Terry Crews, Hoffman’s agent is Adam Venit, who Crews accused of groping him.

-Meanwhile, this is a great piece on the utter failure of male apologies this year.

–Gabriel Byrne says that Kevin Spacey‘s behavior shut down the Usual Suspects filming for 2 days. “It was only years later that we began to understand that [filming] was closed down for a particular reason and that was because of inappropriate sexual behavior by Spacey.”

–More allegations have come out against Prison Break/iZombie actor Robert Knepper. They’re awful. He denied all allegations, adding “Until I can sit down and have a dialogue with my accusers, managed not by the press but by an impartial mediator, I have nothing further to say on this matter.” How about a judge? Would a judge work?

-Netflix FINALLY cuts ties with Danny Masterson amid rape allegations. He’ll be written out of The Ranch. He released a statement about it, proclaiming his innocence.

-Despite not being super impressed with his behaviour at TIFF, I was starting to root for Armie Hammer. And then he had to go and Milkshake Duck himself by saying the only reason he wouldn’t work with Roman Polanski is because “there’s going to be drama” and that judging what he’s done is “a gray area.”

-It feels like something big is about to break with Bryan Singer, no? His production company is vacating the Fox lot after his firing. Meanwhile, he says he was fired from the Freddie Mercury biopic because he was taking care of an ill parent.

-I recommend reading this Daily Beast interview with the guy who runs the blind-item site Crazy Days and Nights. He had blinds about Weinstein, Spacey, and Lauer for years.

-I didn’t ship them on the show, but Stranger Things’ Charlie Heaton and Natalia Dyer are a pretty darn cute couple IRL.

-This sweet Mark Hamill story might be my fave celeb story I’ve read in a while.

-I’m really glad I’m not the only one who still isn’t over the fact that the CW crossover turned all our heroes into Nazis. NAZIS!

-Here’s the international trailer for The Last Jedi.