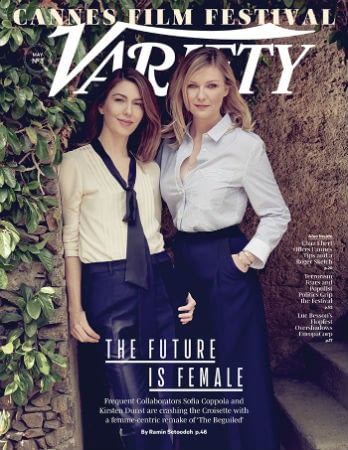 -Look, I’m always here for females in Hollywood calling out the industry’s sexiest BS. But this cover story with Kirsten Dunst and Sofia Coppola is a little…odd. Like, when Dunst complains that she got “paid a lot of money for the Spider-Man movies but definitely the men were getting paid more”? Um, did she expect Tobey Maguire-level pay on that one?

-This is why British awards shows are so much better than ours. Look at the loser’s face at the 0:47 mark. Priceless!

–Blake Lively is going to play a single-mom-turned-cage-fighter in a new movie directed by the guy who did The Notebook. I don’t understand how a lot of those words work in the same sentence.

–Dave Chappelle is now trying to take back what he said on SNL about how we should all give Donald Trump. “I f—ed up. Sorry.”

–Mo’Nique claims she was “whiteballed” by Lee Daniels, Tyler Perry, and Oprah. Is that a thing?

-A spinoff of The Young Pope is coming to HBO? Why? Has anyone even mentioned that show after it premiered?

-Fox’s trailer of Ghosted with Adam Scott and Craig Robinson made me laugh.

-Here are the new ABC fall trailers. The Gospel of Kevin looks cute, but that might be my Jason Ritter blinders talking. It’s also great to see Jenna Fischer back on the small screen.

-ABC also confirmed that Katy Perry will be a judge on their revival of American Idol, and that Roseanne Barr, John Goodman, Sara Gilbert, Laurie Metcalf and Sarah Chalke are all coming back for the Roseanne reboot (despite a very tepid reaction from the upfronts crowd). They also announced that Marvel’s Inhumans will air on Friday nights with Agents of Shield which doesn’t sound good — although to be fair, the Friday “death slot” isn’t really a thing anymore. ABC’s Tuesdays-at-10 time period seems more of a death sentence.

-Speaking of TV, here’s a look at the current season in 5 really depressing charts. EVERY network show has dropped in the ratings except for The Bachelor, of all things.

–Jimmy Kimmel is going to host the Oscars again next year. Sigh.

–Supergirl’s next episode is call “Nevertheless, She Persisted”? Now I want to catch up on that show…

–Emma Stone and Steve Carell square off in the first trailer for the Billie Jean King movie Battle Of The Sexes.