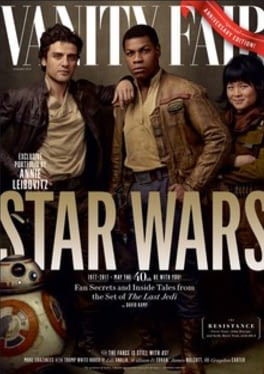 -All of the Vanity Fair Star Wars covers are great, but the one featuring John Boyega and Oscar Isaac is making the internet blow up. Finn is wearing Poe’s entire outfit from the Force Awakens — not just the jacket, but the belt and pants too. It’s like fanfiction come to life!

-I was grossed out that media outlets kept calling Beyoncé’s baby shower a “push party” until I realized that’s how she and Jay Z referred to it themselves. Be better, everyone.

-A Pirates 5 writer says Dead Men Tell No Tales had a female villain… until Johnny Depp made them change it. He just keeps getting dreamier and dreamier, huh?

-I didn’t see this one coming: Scarlett Johansson reportedly got cozy with Weekend Update’s Colin Jost at the SNL season finale after-party.

-During the terribleness that was last night, this story about Mr Rogers stood out as a little sliver of wonderfulness amongst the darkness.

-Meanwhile, Ariana Grande’s team is still assessing whether or not to continue her tour following the Manchester attack.

–Chrissy Teigen expressed a favourable opinion about Ed Sheeran on Twitter and got pulled into the squad wars.

–Katy Perry keeps flip-flopping about whether or not her new song is about Taylor Swift.

-Oh shit, Baywatch is only at 15% on Rotten Tomatoes.

-Twin Peaks returned to not-great ratings, but Showtime is saying lots of people signed up to their streaming site.

-Meanwhile, this is a good read on how incredibly low live TV ratings are the norm.

-CBS says Stephen Colbert had the most total viewers in late night for the TV season, beating Fallon’s Tonight Show.

-Critics are really hating ABC’s Dirty Dancing remake, which airs tomorrow. I was curious, but not after I found out it runs three(!) hours long.

–Cobie Smulders threatens a pharmacist for fertility drugs in the Friends From College trailer.