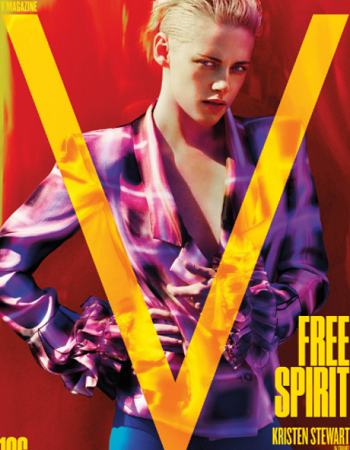 –Kristen Stewart looks awesome on the cover of V (and shows off her butt in the photo spread) but I’m way too tired to try to decipher that nonsense interview. On her film Personal Shopper’s portrayal of technology, she says “When you speak to someone on the phone, that is a decipherable, understandable exchange. But with text and social media, it’s essentially a dialogue with yourself and your interpretation of a shadow.” Sure thing.

-Meanwhile, Emma has a good reason for not wanting to take selfies with fans.

-Congrats to Peter Dinklage and Erica Schmidt, who are expecting their second child.

-I listened to Lorde’s new song a lot today. Like, A LOT.

-Ouch. Matt Damon‘s The Great Wall likely will end up with losses of more than $75M.

-Nothing you read today will be as amusing as Leighton Meester’s reaction to a reporter explaining vaginal steaming to her.  I’m even going to give her a pass (this time) for refusing to answer Gossip Girl questions.

-I’m glad Reese Witherspoon is getting praise for what she’s doing on Big Little Lies. It might be my favourite performance from her.

–John Mellencamp says of ex Meg Ryan “She hates me to death…and I don’t blame her.” WYD?

-Dozens of Academy members spoke out on the Oscars fiasco and many don’t want PWC fired. The show’s stage manager, however, was stunned by their incompetence. “We had to push them on stage, which was just shocking to me.”

–Brad Pitt didn’t attend the Oscars because he was too busy sculpting. Sadly, not a euphemism.

-Meanwhile, JLo is taking a stand against the paparazzi.

–Jaden Smith has shared some more “facts” about the universe.

-Speaking of Amazon, Mad Men creator Matthew Weiner‘s Amazon show will be an anthology series about the Romanovs. And yes, Weiner, David O. Russell and Woody Allen all got straight-to-series orders from Amazon, but Amy Sherman-Palladino has to do pilot season. Sigh.

–Katie Holmes looks lovely on the cover of Town and Country.

–Belle prepares to shimmy her way to freedom in a new Beauty and the Beast clip.

-Here’s the first full trailer for Pirates of the Caribbean: Dead Men Tell No Tales.