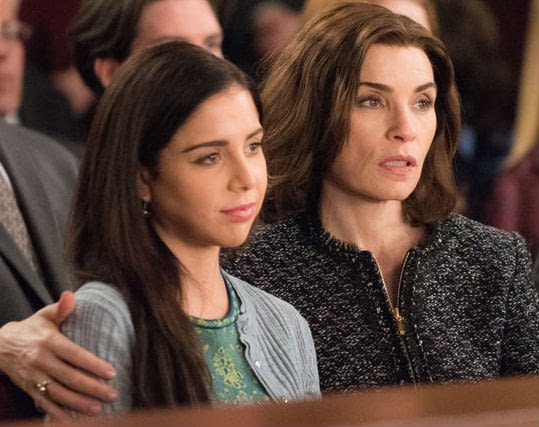 –The Good Wife finale was…not good. I hate procedurals but somehow got sucked into this show because the weekly cases/trials were so weird and riveting, and yet they ended on the most confusing non-case ever. (Did Peter do it? Did the police “pit” the bullets? How did Kurt answer the affair question on the stand?) But even worse, a show that’s been historically very feminist saw the lead character needing her life mansplained by a ghost, her political future decided without her, and her final showdown a catfight about a man she doesn’t even want to be with anymore. Jesus. A few critics seemed to like the bitter, cynical ending (she winds up with no job, no friends, no boyfriend, no husband, no kids — who she recently admitted she didn’t like anyway), but it didn’t feel in any way earned.

-Also, when the showrunners feel the need to explain the ending? Not great, Bob.

–Idris Elba is no longer single. Sigh. I’m mean, I love him so logically I’m really happy for him to be reunited with his baby mama. But my heart guts say otherwise…

–Victoria Beckham says they’d cut her mic off during the Spice Girls concerts and let the other girls handle the singing, but she was cool with it because she was the only one who got Gucci dresses. Not having to work AND getting free clothes? Teach me your ways!

-Can anyone confirm if the Living Proof company that helped produce that the miracle wrinkle-reducing lotion that everyone’s talking about is the same Living Proof that Jennifer Aniston‘s associated with? Cause if so, she’s now controlling the entire world.

-Captain America: Civil War has a worldwide haul of $678 million after just 12 days in release, which means that even if it suffers a Batman v Superman-level crash, it’ll still hit the $1B milestone. [*whispers* I thought Civil War was kind of boring]

-Sadness: Ozzy and Sharon Osbourne are splitting after 33 years(!) of marriage.

-“Without Jen, there’s no #Alias.” Here’s an oral history of the show, featuring Jennifer Garner, J.J. Abrams and more.  I recently rewatched the pilot, and it still holds up as one of my fave first eps ever.

–Blac Chyna is pregnant. Does this mean I have to finally figure out who this person is? Sigh.

-Have you seen the quiz associated with Channing Tatum’s live Magic Mike show in Vegas? It’s feminist slant is making me swoon.

-Also, it took me way too long to discover this delightful interview with Channing and Carly Fleischmann, who is autistic and non-verbal.

–Lauren Hill has apologized for being two hours late for her Atlanta show, saying “I have nothing but Love and respect for my fans. The challenge is aligning my energy with the time.” Frankly though, if you’re buying a ticket to a LH show in 2016 and expecting her to show up on time, you’re an idiot. She’s been consistently pulling this crap for years.

–Brie Larson had a big weekend. She hosted SNL and got engaged to longtime boyfriend Alex Greenwald.

–Tom Brady and Gisele are releasing a $200 cookbook (even though all past references to their diet have been beyond depressing).

–Nardwuar has a new interview with Drake and it’s great. Also, the fact that Drake has seriously thought about what song he’s going to play at his wedding is … something.

-I’m very intrigued about which TV shows this writer is ranting on Twitter about. (I’m guessing Sleepy Hollow and Castle?). I disagree with his assertion that its critics’ jobs to be calling out actors who use medical excuses to get out of a series, but still.

–Kate Hudson‘s performance of “Nothing Compares 2 U” is surprisingly pretty great.

-Meanwhile, Nick Jonas was grilled by Ellen on his relationship with Kate Hudson.

–Aaron Paul, Amanda Seyfried and Russell Crowe get emotional in the Fathers and Daughters trailer.