–Meghan Markle went all in on her Ellen appearance. She was the episode’s only guest and spent the hour pranking people by doing squats and drinking from a baby bottle, talking about her kids’ Halloween costumes (“Archie was a dinosaur for like 5 minutes” and Lilibet “was a little skunk like Flower from Bambi”) and using the platform to advocate for paid family leave (“As a mom of two I will do everything that I can to make sure we can implement that for people”).

–Pete Davidson spent his birthday with Kim Kardashian and Kris Jenner and they all wore matching outfits so that’s happening.

–Shawn Mendes and Camila Cabello have split. They both posted the same statement on IG stories: “We’ve decided to end our romantic relationship but our love for one another as humans is stronger than ever.” So I guess that blind about her on a plane talking about a breakup was legit.

-Rapper Young Dolph was shot and killed at a popular local cookie shop in Memphis, according to police.

-This is a great piece on Taylor Swift and why her most powerful weapon will always be how she plays with our knowledge of her past and her life as a text.

-She released the sad girl autumn version of “All Two Well” that she recorded at the Long Pond Studios. She’s smart to release all her singles before Adele drops her album tomorrow and dominates the charts.

-Here’s the trailer for season two of Emily In Paris. God, season one feels like a fever dream.

-The Wheel of Time reviews are not great. THR calls it “dangerously close to a parody of the genre at its most formulaic,” the Washington Post says it “wildly miscalculates what made its predecessor [Game of Thrones] so watchable” and Variety says “The result is a show that may well please Jordan’s core fandom from the first but which makes for a frustrating watch for viewers who care less about whether “The Wheel of Time” outdoes “Game of Thrones” for spectacle than about whether the show they’re watching is coherent and well-crafted on its own terms.”

-This is a lovely profile on Jamie Dornan, who says he would love to play a superhero, is studying Robert Pattinson’s career, and wishes his dad could have seen Belfast.

-Is there a chance Letitia Wright will get recast in Black Panther after her alleged anti-v*x status keeps creating potential shooting delays?

-Ghostbusters Afterlife is a weird one. Critics are getting pressed by how many fan service-y elements refer to the original, but personally I thought that it had little to do with its roots beyond surface-level nods. The first Ghostbusters was a raunchy comedy about a bunch of dirtbags who end up saving the world; this one feels like an 80s Spielberg movie with a bunch of heartwarming kids. I liked it well enough; it just didn’t feel like a Ghostbuster movie.

–Christine Baranski, Cynthia Nixon and Carrie Coon stars in the trailer for The Gilded Age, from the creator of Downton Abbey. It was originally picked up for NBC and is now airing on HBO, which is quite the change.

-Here’s a a teaser for Adam McKay’s Don’t Look Up, which Jennifer Lawrence then explained to Vanity Fair.

–Jennifer Lopez, Owen Wilson and Maluma star in the trailer for Marry Me. This looks awful but marriage of convenience is one of my favourite tropes, followed closely by a normie falling for a celeb, so *shrug*. 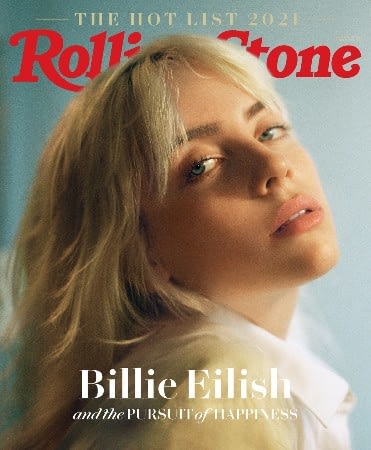 –Billie Eilish talked to Rolling Stone about planning to move out of her parent’s house, how she only watches TV on her phone (“I can’t go to the bathroom without watching something on my phone. I can’t brush my teeth. I can’t wash my face”) and getting over a fame-related traumatic experience (“I went through some crazy shit, and it really affected me and made me not want to go near anyone ever”). She also brought her dog to the photoshoot.

-Meanwhile, her rumoured boyfriend is apologizing for old racist and homophobic social posts.

–Anthony Mackie is getting some heat on Twitter for his comments about people shipping his character with Sebastian Stan‘s in Falcon & The Winter Solider. “So many things are twisted and convoluted. There’s so many things that people latch on to with their own devices to make themselves relevant and rational…It used to be guys can be friends, we can hang out, and it was cool…You can’t do that anymore, because something as pure and beautiful as homosexuality has been exploited by people who are trying to rationalize themselves.” I agree with this thread that actors shouldn’t be required to speak on the writers’ queerbaiting — though having an answered prepared wouldn’t hurt. But I really agree with this thread about how queer audiences are desperate for representation because there’s so little of it in Hollywood, and it’s really not hard to just say “hey man, you do you.” Mark Hamill had it right when he was asked questions like this.

-Though full reviews for Black Widow are still embargoed, the first initial reactions are positive, with Florence Pugh getting lots of shout outs for her performance.

–Hugh Grant is shooting down rumours that he has a green card marriage.

-It feels like Stephen Colbert is having a really busy week trying to throw his guests a life raft and stop them from saying more — and they just won’t.

-The Friends reunion is the gift that keeps on giving. On James Corden’s show last night, he aired a clip of a “carpool karaoke” segment he filmed with the cast at the time.

–Marc Maron was taking some hits on Twitter over an interview he did with William Zabka (in which he admitted he’s never seen the show, so the actor stepped in.

-This could become a problem with travel. Springsteen On Broadway and Jimmy Fallon’s show will not allow audience members who were vaccinated with AstraZeneca.

-Um, Nicolas Cage is in a new movie about a truffle hunter who searches for his pig after she is kidnapped. It’s called Pig. I can’t believe this is real.

“This is me looking quietly confident shortly before my beautiful and brilliant love Natalie, destroys me at chess.” Congratulations Henry Cavill ❤️ https://t.co/S9gXnZCcWZ pic.twitter.com/bNzbRXwJ7L

–Henry Cavill posted a sweet picture with girlfriend Natalie Viscuso — and the internet immediately uncovered an old episode of My Super Sweet 16 that she appeared in.

-She reportedly flew to UK to be with him earlier this year while he was filming the second season of The Witcher. Getting on an airplane right now must mean it’s love.

-Congrats to Macaulay Culkin and Brenda Song, who welcomed their first child together – a baby boy named after his late sister, Dakota.

–According to his lawyer, Harvey Weinstein is nearly blind, experiencing cardiac issues and has had four teeth removed.

-The Talk returned today for its first episode in a month, and Sheryl Underwood talked about her heated exchange with Sharon Osbourne that led to the hiatus. “I feel like I’ve been in, like, PTSD because it was a trauma, and I feel like I want to get past this because I really wanted to get back to work with my friends and my colleagues and the crew … but I also wanted to get back to the audience,” she said. “I didn’t want to escalate things with Sharon because I thought I was having a conversation with a friend, but also I knew I had to be an example for others to follow because I didn’t want to perceived as the angry black woman, and that really scared me.”

–Lucy Liu has joined the Shazam sequel as the sister of Helen Mirren’s villainous character. How is this movie pulling a cast like this??

-Grey’s Anatomy star Jesse Williams is still locked in that brutal custody battle. A judge has ordered them to go to “high conflict parenting class.”

–Kanye West’s lawyers responded to Kim Kardashian‘s divorcing filing, agreeing with her that they should have joint custody of their four children and neither of them need spousal support.

–This is a good piece on how celebrity bloggers Lainey Gossip and Perez Hilton have been reckoning with the awful stuff they wrote in the 2000s — and how they’re taking radically different paths in their apologies.

–Daniel Dae Kim opened up to Vulture about his fight for fair pay on Hawaii Five-0, and whether he felt his costars were allies. “I think any time you have an ensemble of actors, everyone’s objectives are unique and individual. So it’s hard for me to collectively say whether they were allies in this. And I do know that the way things got spun by the end changed my relationships with them.”

-Thunder Force was really, really not good — but this Jodie Foster bit made me laugh.

–Vanessa Carlton revealed she wrote “A Thousand Miles” abpout a “famous actor” who went to Juilliard — and her fans have guesses.

-Some viewers of HBO’s The Nevers took to Twitter to express their frustration with being caught off guard by Joss Whedon’s name in the credits.

–Rihanna and A$AP Rocky are still hanging out.

-I love the dress Anna Kendrick wore to the BAFTAs this weekend.

-Minari’s Youn Yuh-jung won best supporting actor and said she was happy to be recognized by British people because they’re “known as very snobbish people.” God, I love her with my whole heart.

-I gave up on Shameless years ago, but fans seem to be disappointed by last night’s series finale. Which is the exact opposite reaction that the Wynonna Earp finale seems to have garnered.

–Sebastian Stan promoted his new movie by posting a pic of his butt. Works for me!

–Uzo Aduba is leading HBO’s In Treatment revival, which just got a new trailer and a May 23 premiere date.