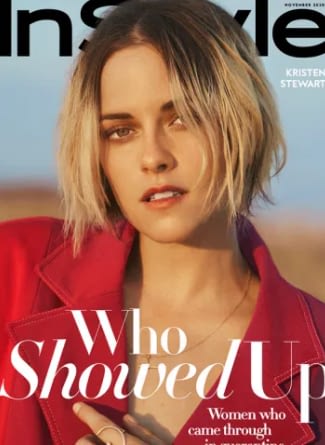 –Kristen Stewart gets candid in the new issue of InStyle, opening up about the pressure she once felt to label and discuss her sexuality in public. “I did feel an enormous pressure, but it wasn’t put on me by the [LGBTQA+] community. People were seeing those pictures and reading these articles and going, “Oh, well, I need to be shown.” I was a kid, and I felt personally affronted. Now I relish it. I love the idea that anything I do with ease rubs off on somebody who is struggling. That shit’s dope!”

-Also, Stewart looked amazing when she appeared (remotely) at this week’s Chanel show.

–Kelly Rowland is pregnant with her second child — and debuted her baby bump on the cover of Women’s Health.

-SNL has dis-invited this week’s musical guest, country singer Morgan Wallen, after social media posts surfaced of him partying and kissing strangers this past weekend, despite’s SNL’s covid protocols. He said on Instagram: “My actions this weekend were pretty shortsighted and they obviously affected my longterm goals and dreams…I think I’ve lost myself a little bit. I’ve tried to find joy in the wrong places, and it’s left me with less joy.” Dude has a new baby, so it’s a bad look all around.

-Meanwhile, Maya Rudolph says shooting the SNL season premiere was “really difficult” due to the new protocols. “Everything was slower, it was harder to get things to cards, I didn’t really get my lines until air. So I had never run that sketch until we did it live.”

-This is nice: Ryan Reynolds is helping make sure students in Nunavut are properly dressed for winter by partnering with Canada Goose to send parkas to the more than 300 students at the Inuujaq School in Arctic Bay.

-I hope starring in the next Mission Impossible movie doesn’t get Hayley Atwell tangled up in Tom Cruise rumours, but I do hope it makes her a big star. Despite being in the Captain America films, I don’t think she’s as well-known as she should be.

–Betty Gilpin wrote a eulogy for Glow for Vanity Fair, and man, every time I read anything she writes (whether it’s a tweet about being nominated for an award or an essay about having “pea-sized confidence with watermelon-sized boobs”), I just want to read more. She’s so, so funny. (“Panicked that I was never going to be able to support myself as an actor, a decade ago I did an arc on a show where you saw my areolas before you saw my face. Avoiding eye contact with ancestors’ ghosts, I bravely signed on to press my taint against the lens every four frames for Chipotle and weed money, while the other actors did real scenes in between.”) Get this woman a book deal!

–Reese Witherspoon and Jennifer Aniston are heading back to the set of The Morning Show, which is scheduled to resume production this month. Steve Carell is also heading back for season 2 which is … a whole lotta why?

–Sarah Jessica Parker wrote a passionate plea to save Broadway in Variety, saying “New York especially needs theatre because so many New Yorkers need theatre — the thousands of people employed directly and indirectly by the industry, doing collateral work, from the servers at the surrounding restaurants to the people responsible for dry-cleaning costumes.”

-A source tells Us Weekly: “Demi [Lovato] has been acting as though she was never engaged to Max [Ehrich] and that their relationship never happened. She is still not speaking to him and fully cut him out.” Well, yeah. That’s called moving on.

–Armie Hammer was Jimmy Kimmel’s first in-person guest to be in the studio since covid started — and he wore a spacesuit for some reason.  Still looked better than he did in last month’s GQ.

–Ruby Rose says her back injury was not the primary reason for her Batwoman departure. “We went into lockdown with COVID and thinking of in quarantine and locked down, there was a lot of thought and reflection and kind of everyone did it. We sort of mutually agreed that probably what was best for the show, um, at the time was they go in a different direction and I go in a different direction.” That is a very nice spin on it.

-I was really hoping that today’s news from The Postal Service would be an new album. Instead it’s a (admittedly funny) video about voting. In it, the band holds Zoom auditions with Anne Hathaway, Kenny G, Weird Al, Slash, Huey Lewis, Bret McKenzie, Vanessa Bayer, Ishmael Butler, Patton Oswalt and more.

-Here’s the latest trailer for News Of The World starring Tom Hanks, arriving in theatres on Christmas Day (supposedly).

-Hollywood is really excited because the trailer for Ryan Reynolds’ new movie Free Guy got 55 million views in 24 hours. Yeah, that doesn’t mean people will flock to theatres to watch it.