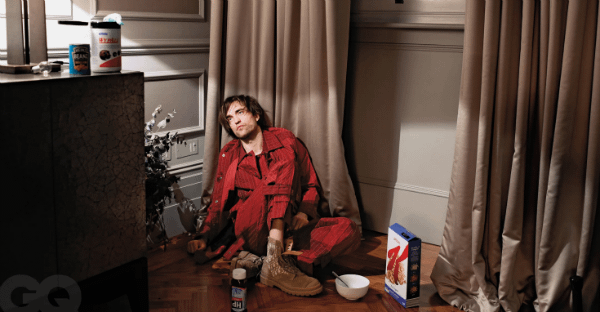 -The best (only?) thing to read today is Robert Pattinson‘s new GQ cover story (complete with some surprisingly good self-portraits). He talks about not training during isolation (“I think if you’re working out all the time, you’re part of the problem. You set a precedent. No one was doing this in the ’70s. Even James Dean—he wasn’t exactly ripped”), and his move to more mainstream movies like Batman (“The problem which I was finding was, however much I loved the movies I was doing, no one sees them. And so it’s kind of this frightening thing, ’cause I don’t know how viable this is for a career. I don’t know how many people there actually are in the industry who are willing to back you without any commercial viability whatsoever”). But the very best part of the article is when he tries to demonstrate how to cook his weirdo signature pasta dish — and ends up setting his microwave on fire.

–Stanley Tucci confirmed Chris Evans‘ tweet about him making martinis at the end of most days while shooting the first Captain America movie. “I like to have a portable cocktail set that I bring to set. And at the end of the day, if it’s an appropriate time, I make martinis for whoever would like to join me. It’s nice. It’s civilized.”

-In the latest episode of his Facebook Watch series, we learn that Justin Bieber thinks it’s funny to surprise wife Hailey with random Nerf gun attacks during isolation. No jury would convict her.

-He also said that she pops his pimples for him.

–Bryan Adams posted some racist drivel yesterday about his concert being cancelled, saying “Tonight was supposed to be the beginning of a tenancy of gigs at the @royalalberthall, but thanks to some fucking bat eating, wet market animal selling, virus making greedy bastards, the whole world is now on hold.” After being thoroughly dragged for it, he didn’t delete the post but he did offer an apology, posting “Apologies to any and all that took offence to my posting yesterday. No excuse, I just wanted to have a rant about the horrible animal cruelty in these wet-markets being the possible source of the virus, and promote veganism. I have love for all people and my thoughts are with everyone dealing with this pandemic around the world.” Canada will never cancel him, no matter what he does, sadly.

-It’s been such a big week for Center Stage news! A new TV adaptation has been ordered from Jennifer Kaytin Robinson (who created Sweet/Vicious and Someone Great).

-This oral history of Mad Max: Fury Road is excellent. Riley Keough met her husband on the set!

-Disney announced that the live recording of the Broadway production of Hamilton, starring Lin-Manuel Miranda and the original cast, will hit Disney+ on July 3. This was originally set for October 2021 as a theatrical release so this is quite a change. It’ll be interesting to see if the curse words get muted for Disney+.

-It’s kind of weird that the Unbreakable Kimmy Schmidt interactive special dropped today on Netflix and it doesn’t seem like there was any buzz about it.

-I’m sure she hired a PR firm for this, but Alison Roman’s apology is one of the best I’ve ever seen.  She acknowledges her white privilege, the cultural appropriation in the food world, and how no one should be expected to accept her apology or help her improve.

–Chrissy Teigen posted a thread about Roman’s response, saying she wants to put it behind them.

-This is a good piece on how Guy Fieri is the last unproblematic food person. I love this Shane Torres quote: “He goes around the country to small businesses and gives them free advertising on a national platform on a weekly basis, but because his hair looks like he was electrocuted while drinking Mountain Dew, people act like we need to saw his head off and put it on the internet.”

–Jeffrey Katzenberg is blaming the pandemic for Quibi’s rough start (even though every other entertainment streaming service is reporting a search in usage/revenue.) In a new NYT interview, he gets “momentarily steamed” when the topic of TikTok’s growing success is raised. “That’s like comparing apples to submarines.”

-Ink Master star Daniel Silva has been arrested for the drunk driving crash that killed YouTuber Corey La Barrie, who was in the passenger seat. Authorities allege that Silva had to be stopped from leaving the crash site by witnesses.

-Solstice Studios moved up the release of the Russell Crowe thriller Unhinged from September to July 1, hoping it’ll be the first new Hollywood release as theaters reopen. I’ll believe it when I see it.

–Tina Fey hosted a virtual telethon called Rise Up New York and couldn’t hold back her emotions when she learned about the event’s monumental success – they raised $115M.

–Ethan Hawke plays the controversial abolitionist John Brown in the seven-episode Showtime series The Good Lord Bird, based on the bestselling novel by James McBride.

Bragelina Prep for Their Wedding

Miley Cyrus and Liam Hemsworth Are “Hanging in There”