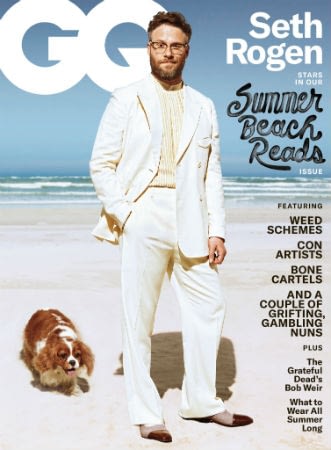 -I love how everyone’s freaking out about how good Seth Rogen looks in his new GQ spread. He talks about Kanye West’s influence on him and why he and his wife don’t have kids. “We very much like our lives, so we will continue to put it off, it seems like, for a little while…I’ve had my friends be like, “Yeah, it really was hard on our relationship.” I’m not saying we couldn’t overcome it, but, again, we really get along and have a very good dynamic. She works very hard, and a lot as well, so when we’re together, we really try to enjoy each other and hang out.”

–Rihanna’s NYT interview is a must-read: “I love being black. So, sorry for those who don’t like it.”

–Celine Dion‘s episode of Carpool Karaoke aired and she was even more extra than we could have hoped for!

–Johnny Depp accused ex-wife Amber Heard of having “painted-on bruises” to allege abuse, saying “She was the perpetrator, and I was the victim.” For crying out loud, her police reports had medical records in them!

–Scarlett Johansson and SNL’s Colin Jost are engaged after two years of dating. This is going to be husband No. 3. (I always forget she was once married to Ryan Reynolds.)

-In their new Esquire interview, Brad Pitt and Leonardo DiCaprio talk about getting butterflies when meeting Luke Perry on the set of Once Upon a Time in Hollywood, and it’s very sweet.

-Also, I’m sure Brad and Leo like each other — but this clip of them on the Cannes red carpet makes it look like they really, really don’t.

–Colin Firth came to Elle Fanning’s rescue when she fainted at a Cannes party, which is so very Mr. Darcy of him.

-This is a good explanation of Hulu/Disney/Comcast divorce. Basically, I’m expecting to look back at my cable bill as “the good ole days” when we’re all paying twice for all the streaming services we’ll end up getting.

-The endless Keanu Reeves love that has come out of the John Wick 3 promo tour has been such a treat. I especially love this video of him with puppies.  There’s also this great story of him making a teen theatre employee’s day. And of course, his Ellen interview where she questioned why he and Sandra Bullock never got together when they both admitted to crushing on each other at the same time, and he responded “We were working.”

-I don’t watch The Big Bang Theory, but people are really upset by the Penny twist.

-It sucks that Mayim Bialik had to shut down an Instagram commenter who ogled her for wearing a t-shirt — but do you remember the time she wrote a NYT op-ed about how she escaped harassment in Hollywood by not dressing provocatively?

-On a new podcast, Julianna Margulies said she’s done ‘protecting CBS’ over the real reason she hasn’t gone on The Good Fight — because they wouldn’t pay her what she was making on The Good Wife. “I thought, Why am I protecting CBS? I said yes. They said no. And you know what? I need to pave the way for the next one coming up…I also know for a fact that any male star who is asked to come on a spin-off of their show would’ve been offered at least $500,000…If they were to ask me to go back on The Good Fight, paying me what my salary is, [I would be there] in a heartbeat.”

–Joshua Jackson has been cast as the male lead in Hulu drama Little Fires Everywhere, joining a cast that includes Reese Witherspoon and Kerry Washington. I LOVED that book!

-People may have hated it, but Game of Thrones’s finale set HBO’s all-time ratings record.

-Speaking of GoT, Jason Momoa live-streamed his reaction while watching the show and was NOT happy about Dany’s fate. Meanwhile, Emilia Clarke said of Dany’s turn “It comes out of f—king nowhere. I’m flabbergasted.”

–Celeste Barber appears on the final webisode for Gay of Thrones and it’s perfect.

-This Is Us’ Milo Ventimiglia bonds with dog in The Art of Racing in the Rain trailer.