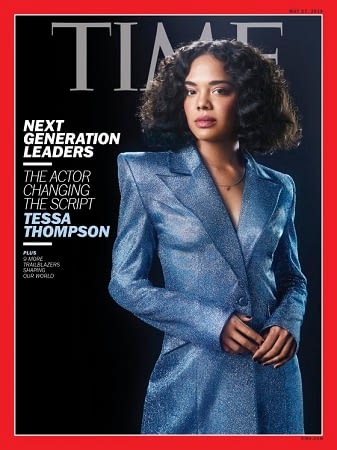 –Tessa Thompson covers the new issue of Time, in which she talks about how the industry is slow to change (“Every big opportunity I have been provided has always been with people of color. There is a long list of white, male filmmakers I would love to work with but they just don’t see me. They just don’t”) and refusing to answer to nicknames on the Men In Black set (“If Chris [Hemsworth] is ‘sweetie,’ I can be ‘sweetie,’ too. But if he’s Chris, I’m Tessa”).

-This is boss: Michelle Rodriguez has confirmed that she will reprise her role for Fast & Furious 9 — but only after securing an agreement for a female writer to join the production.

–Meghan Markle‘s friends are coming to her defense in a new TV special called Meghan and Harry Plus One, hosted by Gayle King.

–Maya Rudolph is such a good friend, she was willing to stick her hand down an airplane toilet for Amy Poehler.

-God, I love that Tiffany Haddish keeps wearing that dress.

-The latest episode of Law & Order: SVU is getting heavy criticism for reportedly enflaming Islamophobia. The showrunner’s responses to people on Twitter about it are certainly not helping.

–Bill Murray talking about Selena Gomez is all kinds of sweet: “I really like her. I mean, you still can’t tell me who the hell ‘Selena Gomez’ is — but Gomez… I really like. She’s unusually bright. She’s kind and she’s natural. I’m always pleased to find some kind of pop icon who I really like.”

-Greys Anatomy’s Ellen Pompeo tore into The Bachelor boss over his tweets to Kelly Ripa: “we don’t attack successful women on our network.” I think I love her. When she’s done playing Meredith, she should write a book on how to be an ally because she’s been crushing it.

-An Amell is starring in the adaptation of The Hating Game!?! It’s the combination of my two favourite things!!! (I literally just fangirled over that author at a reading last month.) Lucy Hale is playing the female lead, which is a pretty good fit for the role physically.

–Lucy is having a big day. The trailer for her Riverdale spinoff also came out. Other new CW trailers include Nancy Drew and Batwoman.

-I don’t love the silly petition by Game of Thrones fans (we can bitch and moan about TV shows but the only thing we’re entitled to control is our remotes; if you hate it, just turn it off and write fanfic), but I do love the totally ludicrous and not gonna happen “Jamie is still alive” theory.

-Meanwhile, Gwendoline Christie told EW she was not happy when she found out that Jamie was leaving Brienne for Cersei. “That’s where I went very red. I was very upset and I had to go for a walk.”

-I also totally missed the point of Varys’ rings last episode, but this makes sense.

–David Letterman sent a surprise message of support to Busy Phillips and her showrunner (who started as his assistant).

-If someone asked me to guess who in Hollywood was bringing back the Saw franchise, Chris Rock wouldn’t have been at the top of my list.

-God bless Chloe Sevigny – aka the only person in the world who can wear this outfit and not incite ridicule.

–Sarah Jessica Parker is over those annual tabloid rumours about her marriage.

–Always Be My Maybe‘s previous trailer already made it looked great but holy shit is that Keanu???