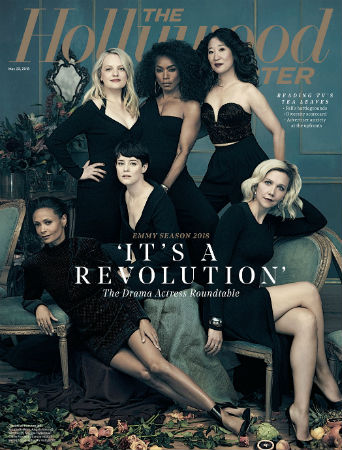 -The Hollywood Reporter’s actresses roundtable features Angela Bassett, Claire Foy, Maggie Gyllenhaal, Elisabeth Moss, Thandie Newton and Sandra Oh, and it’s well worth a read.  They talk about pay parity, sex scenes and deciding when to weigh in on decision making on sets.

-This is exactly what I wanted to hear about Ocean’s 8.

-Jesus, how is The Bachelorette still able to survive? A season 2 producer arranged for a masseuse to come to Meredith Phillips‘ room during production in L.A., and that masseuse drugged and assaulted Meredith, she says.

-Anyone else get the feeling that David Cross is… a lot? During his interview with Colbert, he got so offended that he walked off the set. I mean, I get that it was a bit but I find him exhausting.

–Sarah Silverman was interviewed by GQ and was pretty damn forgiving about controversial comedians in her circle. She spoke about Al Franken (“I understand that I may have cognitive distortion, because I love him so much. But all I can say is, and he may not be excited about this, but he has no sexuality. I believe in my heart of heart of hearts he never copped a feel”), Louie CK (“He’s my brother, so it’s hard. I may not have a very clear perspective on it, but I’m trying to…I don’t have some definitive sound bite or nutshell of how I feel about it, even to myself. But I’m also okay with that”), Aziz  Ansari (“I was just like, ‘Gross, I don’t wanna know that about Aziz!’ Hopefully he’s dealing with things, looking inward, and will blossom from it”) and Roseanne (“I had the gall to get high one night and watch episodes one and two of Roseanne. And I thought it was lovely.”)

-Interesting look at what TV critics are picking as their fave new pilots in the upcoming season.

–Damon Lindelof wrote an emotional letter to fans about his vision for The Watchmen.