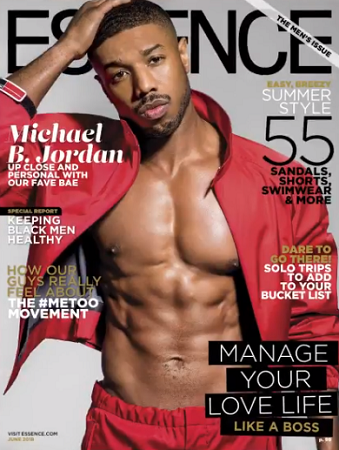 -It’s been one of those weeks where I thought it was Friday every day (it was really not), so this Michael B. Jordan cover couldn’t have come at a better time. He dismisses rumours that he doesn’t date black women: “It’s so funny to everybody because it couldn’t be further from the truth. My dad and my mom both said, ‘If they only knew.’ If they only knew. And that’s the thing that keeps me not tripping about it, you know what I mean?”

-MTV has suspended production on Catfish because Nev Schulman has been accused of sexual misconduct. In a YouTube video, a woman who appeared in a season 4 episode accused Schulman and an unnamed female producer of harassment and assault. He’s denied it, saying “The behavior described in this video did not happen.”

-Congrats to Chrissy Teigen, who had baby number 2.

–Meghan Markle released a statement that her father will not be attending the wedding. I’m still not convinced.

–Gillian Anderson will star as a sex therapist in a new Netflix series and I’m totally here for it.

-Six months ago, Mo Ryan broke the story that NCIS NOLA showrunner Brad Kern had been the subject of numerous HR complaints. CBS now says Kern is no longer showrunning, but he’s still a “consultant.”

-I’m sad that they’re all ending, but I’m really glad that the CW is giving iZombie, Crazy Ex-Girlfriend and Jane The Virgin a chance to end on their own terms and plan their final runs. Too bad that Jane isn’t coming back until mid-season, though. So long to wait after that huge finale twist!

-Now that the upfronts are over, here are the trailers for all the new broadcast shows debuting this fall. Medical drama New Amersterdam seems to be NBC’s biggest bet because it landed the coveted post-This Is Us timeslot, The Passage on Fox might be decent (I liked the book and anything that puts Mark-Paul Gosselaar back on my TV is tops), critics really seemed to like what they saw of Leighton Meester’s Single Parents, and on the CW the Charmed trailer actually looks…good? It’s from the Jane the Virgin showrunner so suddenly I have high hopes.

-CW’s next superhero show crossover will feature Batwoman and the city of Gotham. Huh.

-I love Buzzfeed’s ode to Winston on New Girl. He was such a perfect weirdo.

-Stop claiming that fictional characters have different sexual orientations than what is actually seen onscreen, writers. That’s not representation, that’s just pretending to have representation. It doesn’t count.

-Why even ask John Travolta about his thoughts on Me Too? Like, why is he even relevant to the discussion?

-I adored Zombieland so I’m very psyched by the news that a sequel with the original cast is slated for next year. Between this and Jordan Peele executive producing a show about vengeance-driven Nazi hunters for Amazon, it’s a good time for zombies.

-The red-band trailer for Sorry to Bother You has arrived. Oh yes.