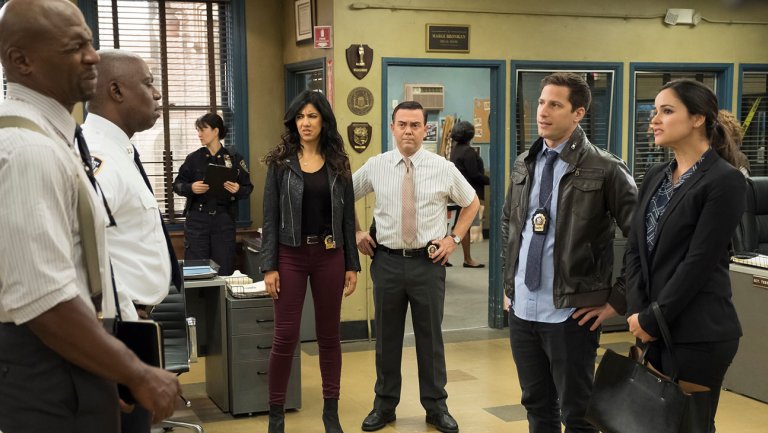 -It’s killing season in TV land this week. Fox just canned Brooklyn Nine-Nine (nooo!!!), The Mick and Last Man on Earth — but weirdly, they have room for a dumb Tim Allen sitcom. They still haven’t announced the fate of Lethal Weapon (I’m still shook about how bad an actor’s behaviour must have been to get thrown off a show the network wanted to renew. Actors behaving badly is the norm, so it must have been REALLY bad).  Over on NBC, Law & Order: SVU, Blindspot and the Chicago shows will survive but there’s still no word on Timeless.

-I don’t know why Chris Hemsworth and Chris Pratt did a couples photo shoot, but I’m not complaining.

-This was such a good troll for Veronica Mars fans…

–Amal Clooney was so worried her Met Gala dress would rip, she changed in the gift shop. Seems like a lot of work for a not-great dress.

-In response to the profile, Yashar Ali wrote a rebuttal for HuffPo: “I’ve spoken to over a dozen survivors of Weinstein’s sexual predation about Chapman and all of them surprisingly said they believed she was aware, in some form, of Weinstein’s behavior. Two of them told me that Weinstein made misogynistic remarks to them in front of Chapman and she did not react in any way.”

–Ariana Grande and Mac Miller have split after nearly two years of dating.

-People keep trying to put Justin Theroux and Emma Stone together. I’m going to continue to cling to a blind item I read that said she had no interest in dating him. I’m CLINGING to it!

–Jennifer Garner made a music video about being a mom for Ellen. I don’t get it.

-I liked this interview with Nick Offerman: “After Parks and Rec, the parts coming my way were overweight men in briefs, crying.”

–Jennifer Lopez and Jimmy Fallon faced off in a fast dance dance off!

-In an interview with Lana Del Rey for Elle, Kendall Jenner says it was “weird” when her younger sister had a baby before her.

–Chris Brown is being accused of hosting a party at his L.A. home where a woman claims she was repeatedly raped by two of his friends.

-Writers for the original Roseanne series say they’re struggling to reconcile the character they wrote with the reboot’s new, Trump-loving character who jokes that her Muslim neighbors’ pile of fertilizer in their yard means they’re making a bomb. “I don’t recognize that character.”

-I really, really don’t want Roseanne to attempt to do a #MeToo episode.

-I kind of love that Jessica Chastain is walking the walk. She’s producing and starring in 355, a female spy movie with Penélope Cruz, Marion Cotillard, Lupita N’yongo and Fan Bingbing.

-Watch Deadpool apologize to David Beckham for insulting his voice in the first movie.

-I love this: Patty Jenkins may earn nine times her Wonder Woman salary for the sequel, according to Variety.

-I guess I’m in the minority but I really enjoyed I Feel Pretty. Greta Gerwig did not.