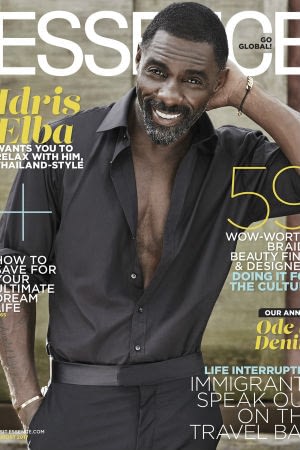 -We’re blessed with so many Idris Elba covers this month! Here he is on the new cover of Essence and I’m dead. This is my ghost typing. Oh god, I just discovered the behind-the-scenes video. Yup, I am deceased.

–Jesse Williams denies cheating rumors surrounding him and Minka Kelly in Jay-Z’s latest “Footnotes” video: “I was in a relationship 13 years, 13 real years, not five years, not seven years, 13 years and all of a sudden motherf–kers are writing think-pieces that I somehow threw a 13-year relationship — like the most painful experience I’ve had in my life, like with a person I’ve loved with all of my heart — that I threw a person and my family in the trash because a girl I work with is cute.”

-Meanwhile, in what can only be considered exceptionally poorly timing, news broke today that the newly single Jesse is now reportedly dating … drumroll please … Minka Kelly!

-Speaking of crazy bad timing, Ben Affleck and new girlfriend Lindsay Shookus were photographed looking happy yesterday — and then People ran a story about how Jennifer Garner confronted Shookus about an alleged affair with Affleck in 2015.

–Shia LaBeouf shouts profanities at police in new arrest footage. He was reportedly arrested in a hotel lobby in the middle of the night for yelling at someone who refused to give him a smoke.

-The critics are not being kind to Valerian and the City of a Thousand Planets. THR says “The Razzies don’t need to wait until the end of the year to anoint a winner for 2017” while EW calls it “an epic mess.”

-Showtime is reportedly developing a sequel to The L Word.  There was a cast reunion in a recent issue of EW and I forgot how much I miss this show.

–Gwen Stefani is being sued by a fan claiming she was injured in stampede at concert.

–Guy Ritchie‘s live-action Aladdin can’t find its Aladdin. The studio is eyeing Naomi Scott or Tara Sutaria to play Jasmine, but can’t lock the deal until the male lead has been selected. I really, really hope it’s because Disney is looking for a diverse cast and not that they just put this story out there so that later they can be all “hey, we tried.”

–Bryce Dallas Howard posted a cute photo of her and Chris Pratt finishing up on Jurassic World 2. It’s not clear what shoes she’s wearing, though.

-The cute guy from Younger is in an open relationship with a lesbian. Why not?