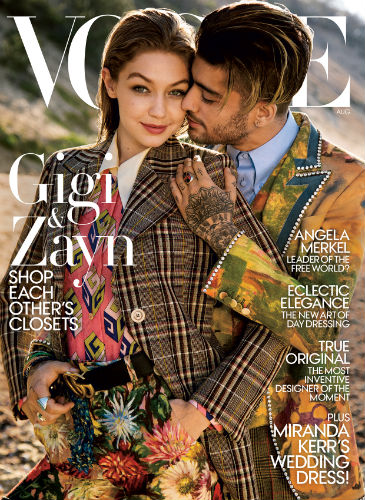 -Vogue did a cover about gender fluidity, though I don’t think hetero couple Gigi Hadid and Zayn Malik talking about swapping clothes is probably the right way to do it.

-How the hell is Blake Lively in talks for a spy franchise? The fact that she continues to get movie work while Leighton Meester doesn’t is insane.

–Gwyenth Paltrow‘s GOOP is defending its health advice and doctors with a series of posts revisiting its most controversial topics and “offering our contributing M.D.’s a chance to articulate theirs, in a respectful and substantive manner.” First up: those jade eggs you’re supposed to stick in your vagina. (Spoiler: the doc gets very defensive.)

–Donnie Wahlberg left a $2,000 tip at a Waffle House, proving his still the best Wahlberg.

–Arcade Fire has a new song out called “Electric Blue.”

-Thousands of confidential documents were released in Walking Dead creator Frank Darabont‘s lawsuit against AMC, and while everyone is focused on his obscene emails (which are definite worth a read), it’s the financial info and behind-the-scenes scoop that has me intrigued. After Darabont moved the second season to one set location — a farmhouse — to accommodate the network’s insane budget cuts, AMC executives demanded to see ALL of the season’s scripts up front before shooting. No show has those ready. I was also shocked by the bonuses for Emmy and Golden Globe awards ($25,000 for each nomination, $50,000 for each win).

-Speaking of Emmys, the nominations came out this morning and they felt like a big step backwards compared to last year. The biggest oversight is the lack of love for The Leftovers, which blew away everything else on TV this season. Carrie Coon didn’t even get a nod (though she did for Fargo, which no one is even talking about anymore). Others feeling the lack of love: The Americans, Insecure, Justin Theroux, Rami Malek (who won last year), The Good Place. And who the hell is still voting for House of Cards?! There were some nice surprises though, including noms for Pamela Aldon, Aziz Anzari, Donald Glover, Milo Ventimiglia, Atlanta, Kimmy Schmidt, Stranger Things, and This is Us.

-At least Twitter’s reactions to the Emmys snub of The Leftovers are hilarious.

-Atlanta’s Brian Tyree Henry and his BFF, This Is Us’ Sterling K. Brown, called each other and “screamed a little bit” after getting their Emmy noms this morning.

–Ezra Miller‘s The Flash teams up with Batman and Wonder Woman in a new Justice League photo.

-Wonder Woman is holding better than any superhero movie in 15 years.

–John Oliver told Stephen Colbert that he now wishes he hadn’t made his “Stupid Watergate” joke. “We are turbo-f***ed.”

–Brie Larson tries to survive her unconventional parents, played by Naomi Watts and Woody Harrelson, in The Glass Castle trailer.