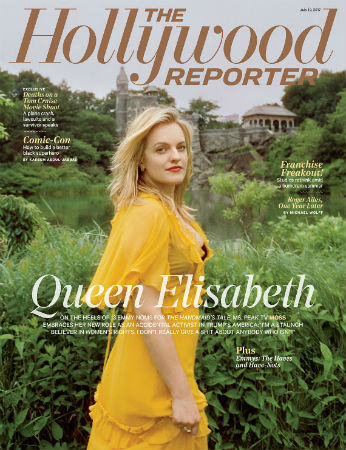 –Elisabeth Moss covers the new issue of THR, in which she talks about becoming an accidental women’s rights activist thanks to The Handsmaid’s Tale: “Now is not really a time to stand in the middle. You’ve got to pick a side”

-Speaking of Moss, the Mad Men pilot aired for the first time ten years ago today. Here’s a bunch of the cast talking about it.

-If anyone was going deliver juicy pregnancy drama, it was going to be Mindy Kaling. So far, she’s not disappointing us. According to People, she’s keeping her baby daddy’s identity a secret, even from her closest friends.

–Jennifer Lawrence’s attendance at a Broadway showing of 1984 didn’t go very well. She ended up puking in the lobby.

–Ben Affleck has dropped out of Netflix’s Triple Frontier “to take some time to focus on his wellness and his family.” He was spotted on a low-key outing in NYC with Lindsay Shookus today.

-Meanwhile, everyone needs to slow their roll when it comes to jumping on Ben about that “on-screen gay kiss” quote. First of all, it’s not even a direct quote; it’s a story that Kevin Smith told. Secondly, the story was from 20 years ago. Unclench, people.

–Julia Roberts‘ TV series Homecoming is coming to Amazon, so expect that to sweep the Emmys next year.

–Ansel Elgort‘s comments on his girlfriend’s Instagram posts are kind of … intense. “I want to lick you everywhere”? He knows those aren’t DMs, right??

–Leonardo DiCaprio just one-upped normcore hipsters by tying a purple plastic bag around his cargo shorts and using it like a fanny pack. When do we get to take away his celebrity card?

–Prince Harry and Meghan Markle are already talking marriage (according to Us Weekly, anyway).

-HBO just announced a new series about an alternate reality where slavery was never outlawed — created by Game of Thrones’ white showrunners Benioff/Weiss. Yes, they brought on Nichelle Tramble Spellman (Justified) and Malcolm Spellman (Empire) as EPs but … yikes. HBO NO, amirite?

-Meanwhile, Star Wars’ John Boyega hit out at the lack of diversity in Game of Thrones.

-Canadian actor Adam Beach is calling for Native actors to boycott the upcoming Yellowstone mini-series because of terrible casting.

–Charlize Theron‘s Atomic Blonde press wardrobe has everyone thinking that Dior hates her.

–Andrew Garfield says his comments about being gay were taken out of context. Mmm-hmmm.

-I love that Jane Austen is on England’s tenner, but the quote they used makes it seem like they don’t understand Pride & Prejudice.

–Madonna filed an emergency court order to stop her letter from Tupac from being auctioned off.

-I stopped watching Outlander in season one, but this is a pretty perfect trailer.

-Here’s The Snowman trailer starring Michael Fassbender. I … don’t get it.