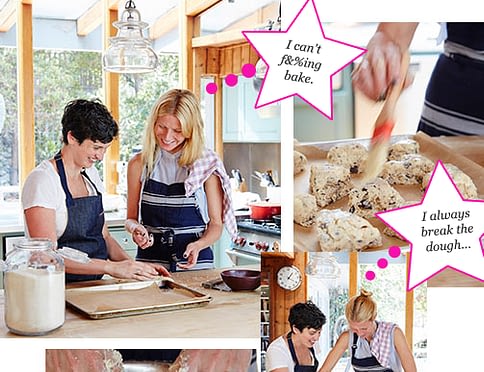 –Gwyneth Paltrow tried to make us care about her adventures in baking by adding cutesy, swear-filled speech bubbles in the latest GOOP. It didn’t work.

-I couldn’t even get through all of J.Lo and Iggy Azalea’s new video. Between this and “Anaconda,” I need a booty break.

-The New York Times television critic wrote an offensively terrible piece about Shonda Rhimes’ new show and the evolution of black female characters on television. There’s a lot of cringe-inducing sentiments: that Shonda only relates to her “angry, black women” characters, that Nicole Beharie is merely a “sidekick” on Sleepy Hollow, that Shonda created How To Get Away With Murder (she’s the producer; the creator is this white dude), etc. Many, many people much smarter than me have already penned rebuttals — including Shonda herself.

-Awww: Leonardo DiCaprio and Kate Winslet have pledged to help the last living Titanic survivor pay for her nursing home fees. She really does make him a better person, huh?

–Ryan Gosling is “madly in love” with his new daughter, says a source. (Some day I’d love to read an article where the source says, “I dunno. He actually seems pretty ‘meh’ about the whole thing.”)

-It looks like Ryan Reynolds may get another shot at playing a superhero thanks to that leaked Deadpool footage.

–Clay Aiken is waving the victim-blaming flag, saying celebs whose nude photos were hacked got what they deserved. Sigh.

–Angelina Jolie will continue to work behind the camera. She just signed on to direct a biopic titled Africa.

-Oh jesus. Not only is Matthew McConaughey not going to be in Magic Mike XXL, but now Andie MacDowell has joined the cast. Does no one remember that she almost single-handedly ruined Four Weddings and a Funeral?!

–Jimmy Fallon‘s version of Family Feud is so much better than the real thing.

-I can’t decide if I love Kate Hudson’s pants or I hate them, but either way I’m totally mesmerized.

-There are a ton of new rom-com-inspired sitcoms debuting this month. You should just skip them all and watch You’re The Worst instead.

-Oh geez. The Maze Runner’star Will Poulter called out a Toronto critic for his scathing movie review.