–John Legend and Chrissy Teigen‬ cover the latest issue of Vanity Fair, in which they talk about getting together (“It got serious pretty quickly. She just entertained the hell out of me, texting me. What people respond to in her tweets today was the same energy in those texts. I didn’t know that I wanted someone funny until I was actually with someone funny”) and why they’re supporting Elizabeth Warren (“She’s the best candidate running today and she comes at it with joy and with sincerity and with a wealth of knowledge and experience”).

-Oof, the video of Ben Affleck stumbling out of a Halloween party this weekend is a hard watch. He was spotted outside Jennifer Garner’s house yesterday, where he told paps “It was a slip but I’m not going to let it derail me.”

-Speaking of celebs who seem like they might need help, Supernatural’s Jared Padalecki was arrested in Austin late Saturday night and is reportedly facing two counts of assault and one count of public intoxication after he allegedly struck both a bartender and the general manager of a club in the face. Terrible timing, especially since he just landed a new show.

-Halloween hasn’t even happened yet, but Gabrielle Union has already won it this year.

-Apple+ lifted the embargo on the reviews of their new TV shows, and Jennifer Aniston and Reese Witherspoon‘s Morning Show is not getting good reviews. Critics only saw the first three episodes so far, but do not seem impressed. Surprisingly, the one people seem to like most is Hailee Steinfeld’s Dickinson.

–James McAvoy and production assistant Lisa Liberati (who he started dating in 2017 — two months after splitting from his wife of 11 years) are reportedly married.

-I guess I wasn’t the only one this morning who was surprised/revolted to learn that they’re still subscribed to Louis C.K.’s newsletter. I have never hit an unsub link faster.

-Game of Thrones creators D.B. Weiss and David Benioff appeared at the Austin Film Festival this weekend, and someone live-tweeted their panel answers — a thread which quickly went viral because their admissions of incompetence were jaw-droppingly candid. They acknowledged that they made “basic writing mistakes” on the pilot, had no idea how to work with costume designers, didn’t feel the need to delve into the books to learn about the characters, and called the whole process an “expensive film school.” Talented female and POC writers are out there sweating in the trenches for their big break, but these two unqualified dolts were given $6 million an episode to learn on the job. And they’re not too embarrassed to openly talk about it! (I mean, why should they be? They landed Star Wars trilogy despite of it.) White dudes will always fail up…

-In the bossiest boss move, Jane Fonda accepted her BAFTA award while being arrested!

-Netflix might be planning to roll out a feature that allows users to binge at higher speeds, which might be the worst move ever. Tighten up your damn shows through writing and editing, not with fast-forwarding. (Aaron Paul also has strong feelings about this.)

–Trent Reznor addressed the Nine Inch Nails sample in “Old Time Road” — and his response is a pretty damn awesome example of lifting up smaller artists: “I said [to my manager], ‘Look, I’m fine with it. I get how stuff goes. They’re not saying they didn’t sample it. Just work it out, but don’t be a roadblock to this.’…Those guys should be the ones the spotlight is on. It was flattering, and I don’t mean to be disrespectful, but I don’t feel like it’s my place to shine a light on me for that.”

–This Paul Rudd video is amazing because: 1) splitting an apple with your bare hands is a killer party trick, and 2) I learned that his new Netflix show costars the amazing actress from Hulu’s This Way Up.

-The CW is in a spinoff frenzy right now. The latest is a new Superman & Lois Lane series from Greg Berlanti, following their life as parents. I’m not mad about it. Tyler Hoechlin was so, so good in the crossover last year, and I liked what little we saw of Elizabeth Tulloch‘s Lois.

–Jennifer Lopez and her Second Act co-star Milo Ventimiglia played “Can You Feel It?” on Fallon. There is not enough money in the world to get me to stick my hand in that box.

-Meanwhile, JLo has been killing it fashion-wise on this press tour.

–Donald Trump might actually believe that Christian Bale is Bruce Wayne. I buy it.

-I don’t watch Supernatural, but my Twitter feed got very excited by the news that Jeffrey Dean Morgan is returning for its 300th ep. (Also, 300 episodes?! That’s insane.)

-This story is bananas: Josh Henderson (Desperate Housewives, The Arrangement, Dallas) was arrested for burglary charges after his neighbors came home this weekend to find about $7,000 worth of jewelry missing, and claimed that surveillance footage showed the actor and two other men breaking in. His camp says it’s a case of mistaken identity.

–Matt Damon gets shafted in a Secret Santa game with Miley Cyrus and Mark Ronson in the new SNL promo.

-Meanwhile, Miley Cyrus says she’s going to star in the new season of Black Mirror. Sure, why not?

–Pete Davidson went to dinner with a woman Carbone and someone snapped a photo of it.

-The Screen Actors Guild Awards nominations came out today, which people look very closely at because they tend to be a good indicator for the Oscars. It was good news for Black Panther’s Oscar chances (though Michael B Jordan didn’t get the supporting nod many were hoping would seal the deal), but there were a lot of surprising snubs (First Man, Eighth Grade, Beale Street). The TV side was a mess though — lots of Ozark, but no Keri Russell or The Good Place? Really?!?

-I really liked this interview from the Outlaw King director talking about rushing to edit the movie after its brutal TIFF premiere.

-My biggest takeaway from the CW crossover: Tyler Hoechlin needs his own Superman show. I know the whole thing was supposed to push Ruby Rose as Batwoman, but he was the new face that stole the show. Also, the fact that he was super dreamy to his pregnant costar during filming is icing on the cake!

-Pixa just announced their next movie and it has an insanely good cast.

-The second trailer for Sandra Bullock’s Netflix horror Bird Box is here. We’re all going to be afraid to leave our houses after we watch this over the holidays, huh? 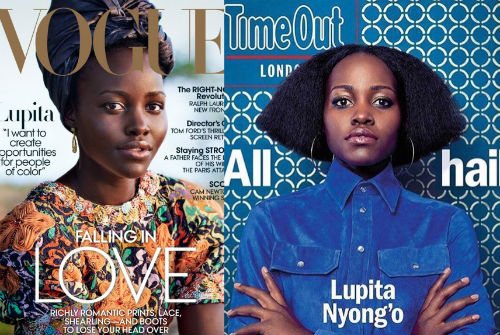 –Lupita Nyong’o’s Vogue and Time Out covers couldn’t be more different — and yet I adore them both.

-And here we go: Brad Pitt released a statement saying he won’t be attending tomorrow night’s premiere of Voyage of Time because “I’m currently focused on my family situation and don’t want to distract attention away from this extraordinary film.”

-Meanwhile, we’ve reached the phase where famous folks who are tangentially related to Brangelina are required to give awkward statements about the split. You’re up, Justin Theroux!

-The more I read about HBO’s Westworld, the more I don’t really care to watch it. Of all the TV critics I follow, my opinions often align with Mo’s, and she seems beyond tired of violent prestige dramas that use violence against women.

-It turns out that Will & Grace reunion really was for the election. Though it’s fun to see them all again (and they look amazing) in a new 10-minute scene, I’m not sure this show ages well. Karen‘s casual racism and Jack‘s ignorance aren’t quite as charming these days, no?

-I almost bought a pair of Fergalicious boots last weekend (which devolved into explaining to a confused sales guy my complicated feelings about Fergie, complete with a diatribe about onstage peeing and milk-laden videos). But at least I like what she wore to Fashion Week!

–Gigi Hadid spoke out about that fashion show attack in today’s issue of Lenny: “Honestly, I felt I was in danger, and I had every right to react the way I did. If anything, I want girls to see the video and know that they have the right to fight back, too, if put in a similar situation.”

-Like her or not, it’s pretty cool that Amy Schumer is the first woman to land on Forbes’ highest-paid comedians list.

-Director Olivier Assayas calls Kristen Stewart the “best actress of her generation.” The two movies I like her most in are both his but still…no.

-I really liked this article on the perils of plot twists in brand new shows, specifically This is Us and Pitch: “Pilots are meant to establish the rules of the game, and twists are meant to be game-changers — and it’s hard to feel the full effect of a game-changer if you aren’t even sure what the game is.”

-Meanwhile, is this the best fall TV season in recent memory?

-I dropped Supergirl pretty early but I’ll give it another try because it’s now on the CW (and that network seems to be hardwired into my heart). Also, this trailer introducing Tyler Hoechlin as Superman is hella charming.

–Viola Davis and Denzel Washington are struggling to raise a family in the ’50s in this Fences trailer, which gave me goosebumps on top of goosebumps.