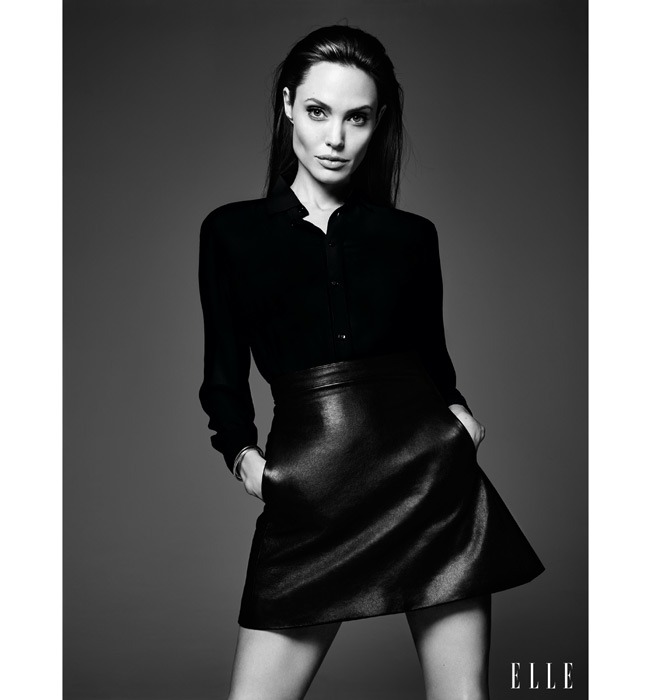 -God, I love when Angelina Jolie has a movie to promote. Suddenly, her sacred privacy goes out the window and she gushes about Brad Pitt, talks about being worried she’d never meet Mr. Right, and opens up about her kids. (Also, doesn’t it look like she’s wearing her Maleficent cheekbones in this photo?)

-That photo of 13-year-old Willow Smith lounging on a bed with a half-naked man that everyone is freaking out about? Will Smith is cool with it.

–Sally Field beat Julia Roberts in a curse-off on Kimmel this week.

–Hugh Jackman, Michael Fassbender and James McAvoy danced to “Blurred Lines” on The Graham Norton Show, and it was glorious.

-In news that will surprise no one, Zac Efron makes a really pretty girl. Seth Rogen does not.

–Patton Oswalt‘s fake apology tweets are a thing of beauty.

–Olivia Wilde joined Billy on the Street for a rousing game of John Mayer or Pepé Le Pew?

–Emma Stone wants women to be nicer to each other already.

–Alec Baldwin reportedly doesn’t want his daughter Irelanddating Ryan Lochte, so he should be thrilled with this photo of her making out with Angel Haze.

-Sleepy Hollow is getting more episodes next season, and I’m not entirely sure that’s a good thing. One of the reasons the first season was so good was because it was tight and focused.

–Kristin Cavallari has given birth to another baby boy.

–Blake Lively has suddenly gone from being in hiding to being everywhere. She followed up her PDA-filled appearance at the MET Gala with a Gucci event.

–Rihanna hosted a MET Gala after-party but Anne Hathaway out-wilded her at it.

–Matt Damon says he’s “thrilled” about BFF George Clooney’s engagement. That makes one of us.

-It looks like the ER money has already run out: Mekhi Phifer just filed for bankruptcy.

–Neil Patrick Harris got super naked for the new cover of Rolling Stone.

-Between her stupid talk about feminism and her ranting about eating clay, I think I need a little break from Shailene Woodley.

-Meanwhile, the Fault In Our Stars trailer is the most “liked” trailer in YouTube history.

–Shenae Grimes thought it would be a good idea to talk shit about Hamilton on Twitter. It was not.

–Justin Bieber‘s got a rumoured new squeeze. Poor girl. (He was reportedly at my hotel in Vegas on Saturday. Unsurprisingly, I didn’t bother to go looking for him.)

–Jennifer Lopez says her split from Marc Anthony was “a tremendous low.”

-If you want to know what James Franco looks like when he’s flirting with young girls, check out this clip from Palo Alto.

–Paul Rudd and Jon Hamm once competed in a game of Trivial Pursuit to impress a girl. (Also, is that not the most unflattering cover photo of Hamm you’ve ever seen?)

-I missed the Mindy Project’s season finale last night, but all reports were that it was perfect and kept up with the rom-com theme.

-Also getting a new show is Rashida Jones, whose cop comedy is coming to TBS.

-In crappy comedy news, Trophy Wife is pretty much done judging by this week’s ratings.

–Rihanna’s Diamonds tour continues to hit roadblocks. After showing up three hours late to her show in Puerto Rico on Tuesday, she’s postponed her home town stop in Barbados indefinitely.

-She still had plenty of time to get a really ugly tattoo and post bikini pics, though.

–This photo is supposed to prove that Kristen Stewart and Robert Pattinson met up yesterday. Um, ok?

–Miley Cyrus dressed up as 1999 VMAs-era Lil Kim, which is probably the tamest costume we could have hoped for.

-In other celebrity costume news, Shenae Grimes dressed as Poison Ivy, Ellen went as Nicki Minaj (the boobs were hilarious), and Joan Rivers was Miley Cyrus.

-I spent a lot of time this morning watching TV behind my pillow because I was so embarrassed for morning show hosts. Matt Lauer dressed up as Baywatch-era Pamela Anderson, while the hosts of Good Morning America each tried out a variety of mortifying costumes. (You could actually see George Stephanopoulos‘ soul dying when he was hanging by wires for that Gravity bit.) Michael Strahan and Kelly Ripa fared a bit better as Miley Cyrus and Robin Thicke.

–Johnny Depp and Amber Heard are set to reunite onscreen in London Fields.

-I know we’re supposed to be focusing on her makeup, but Gwyneth Paltrow‘s body looks sick in her new Max Factor campaign.

-Say it ain’t so! CBS is eyeing a How I Met Your Mother spinoff called How I Met Your Father. This is almost as bad as the news that the CW is developing a show based on Fred Durst’s life.

–Drake’s Yorkville condo just sold for $3.75 million. Who else is coveting that Canada-shaped book shelf?

-The tabloids are really running with this ‘Will and Jada separate‘ story, but let’s all take a deep breath and wait until it’s sourced somewhere other than Radar, mmm-kay?

–Justin Bieber gave some kid in Guatemala the shoes off his own feet, so I guess we all should cut him some slack. I’m not even going to mock his graffiti art!

–Kim Kardashian appeared on The Tonight Show with Jay Leno to promote…what exactly? Her sexy selfies?

-I kind of love Pamela Anderson‘s new pixie cut. What?!

–Eva Longoria‘s ex Tony Parker is going to be a dad.

-Aerosmith’s Steven Tyler was spotted at an Olive Garden, which is all kinds of funny.

-In honor of his twenty years on TV, Conan O’Brien is uploading classic videos, including this 1997 sketch featuring Will Ferrell and Amy Poehler.

-The trailer for 12-12-12, which follows the Hurricane Sandy relief concert, has been released.