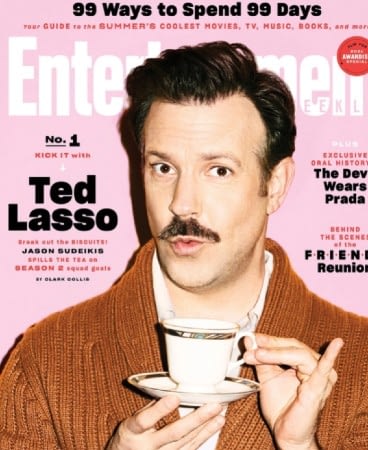 -EW has a spread about the new season of Ted Lasso, which can’t come soon enough!

-In Variety’s “Actors on Actors” series, Nicole Kidman told Chris Rock her fears about playing Lucille Ball in an upcoming movie. “I am way out of my comfort zone right now, Chris. I’m free-falling.”

-This article about Christopher Meloni used a lot of words to just say “his butt.”

–Simu Liu says that his “recent comments on the ending of Kim’s Convenience were never meant to be a massive bombshell exposé.” I’m not sure what he was expecting here.

–Milo Ventimiglia is set to reunite with his Gilmore Girls boss for Marvelous Mrs. Maisel’s Season 4.

–Jimmy Fallon thought the Canadian grocery store No Frills was an actual band.

-I don’t watch Younger but man, are people pissed about the finale. Darren Star‘s dreams of a movie might be optimistic.

–Caitlyn Jenner appeared on The View today and it did not go well for her.

–Jean Smart filmed the Hacks finale’s funeral scene right after her husband died. (Also, I cannot believe this show was created by the guy who played Trey on Broad City.)

-There are a surprising amount of new TV shows debuting this summer.

-I wish Apple TV’s Physical with Rose Byrne was getting better reviews.

–Megan Fox and Bruce Willis are FBI agents in the trailer for Midnight In The Switchgrass.

–Ryan Reynolds lives inside a video game in the Free Guy trailer with Joe Keery and Jodie Comer.

-The first trailer for HBO Max’s new Gosssip Girl reboot has arrived. It follows a completely different set of characters from the original but is set in the same world, so I assume cameos are coming (at least from the parent characters).

–Noah Centineo is doing promo, which means the final To All The Boys I’ve Loved Before Movie is about it hit! (Update: Netflix just announced it’ll come out on Feb 12 and dropped a trailer.) In a new GQ interview, Centineo remembers a scary incident when a group of fans tracked his flight to meet him at the airport and tried to follow him home. (Also, the wild thing about this whole article is how few quotes are attributed to him. The reporter clearly likes him and they talk about a lot of topics, but most of his direct quotes are just short exclamations. It’s odd.)

-The whispers about Armie Hammer continue to get louder. He’s reportedly “stepping away” from his comedy with Jennifer Lopez. In his first statement about the growing scandal, he said “I’m not responding to these bullshit claims but in light of the vicious and spurious online attacks against me, I cannot in good conscience now leave my children for 4 months to shoot a film in the Dominican Republic.” (I’m not sure if using the kids is the direction I would have went on this…)

-Meanwhile, the Daily Mail has some not great video of him doing what looks like drugs.

–Bruce Willis was asked to leave a pharmacy in LA for refusing to wear a mask. He was wearing a bandana around his neck — how hard was it to just put it over his mouth? Jerk.

-He’s since called it “an error in judgement.” Still a jerk tho.

-Today’s wild news day includes this nugget: Rebel Wilson says she was once kidnapped at gunpoint in rural Mozambique. “I felt like I was very good in the crisis. I was like a team leader. They sat us down, and I said, ‘Everybody link arms,’ because I was petrified in the night that they might want to take one of the girls or something.”

-Backstreet Boy Kevin Richardson tweeted a story about losing a friend to Q*non, which is likely a subtweet about Brian Littrell.

–Riz Ahmed revealed that he recently got married, but won’t be revealing his wife’s name.

-Insecure is ending with its upcoming fifth season. If this is what Issa Rae wants, I’m glad she’s getting time to wrap up the series but man, it feels like it hit its stride last season.

-The fact that five different people sent me this Bridgerton duet TikTok is making me question my brand. (J/K; keep sending).

-Speaking of Bridgerton, I love this British Vogue spread of Phoebe Dynevor and Regé-Jean Page.

–Emma Roberts took to Instagram to introduce the world to her son, Rhodes Robert Hedlund.

–Mary-Kate Olsen and Olivier Sarkozy have reached a divorce settlement.

-Amazon confirmed their Lord of the Rings show is about the return of Sauron. This thing is supposed to come out this year, and that’s all we really know about it so far.

–Jon Hamm says he auditioned to play Sandy Cohen in The OC. He’s great, but he doesn’t have the eyebrows for it.

-The SAG Awards are moving to April after the Grammys took their original slot.

–LaKeith Stanfield infiltrates the Black Panthers in the trailer for Judas And The Black Messiah.

Our baby girl is here, healthy & beautiful🙏🏽❤️to try put into words how i am feeling right now would be an impossible task. The love i feel for this tiny human is beyond my understanding.Grateful to know her, proud to call her mine, & thankful for the life we will have together x pic.twitter.com/nvhfOkk2fw

–Zayn Malik and Gigi Hadid confirmed that they’ve welcomed their first child, a baby girl. She could already be a hand model.

-In other baby news, Mandy Moore is pregnant. The This Is Us actress announced on social media that she and husband Taylor Goldsmith are expecting their first child – a baby boy.

-Meanwhile, it looks like This Is Us fans won’t have to wait until November to watch Season 5, as previously announced. The show’s premiere date has been pushed forward two weeks to Oct 27, as production resumed this week. Check out other fall tv premiere dates here.

–Demi Lovato has called off her engagement with soap star Max Ehrich after just two months. (There’s no official confirmation, but that People quote sure sounds like a PR soundbite from her camp.) Meanwhile her fans were convinced that her fiancé is obsessed with Selena Gomez.

-I’m always surprised by the celebrity homes that I really like in Architectural Digest videos. Hilary Duff’s home is lovely!

–Tyra Banks admits “we messed up” when it came to America’s Next Top Model’s mission to be inclusive.

-I never actually watched The Knick but this is kind of amazing: Steven Soderbergh is reviving the series, which ran from 2104-2016, with Andre Holland and Barry Jenkins.

-Riverdales’ KJ Apa and Camila Mendes seem to think that gargling with mouthwash before filming kissing scenes will protect them from covid. And…they may be right?

-Meanwhile, this Vulture article on the ambiguous covid rules on productions and the lack of industry consensus is terrifying. I’m also incredibly curious about what show the PA who said this worked on: “On my Netflix job, the lead actor got sick. Four people — two from the crew and two cast members — died from covid.”

-Netflix has launched a new production hub in Vancouver, where a lot of shows have resumed filming.

-CW stars Asha Bromfield, Candice Patton, Nafessa Williams and Vanessa Morgan joined Teen Vogue for a conversation about diversity in Hollywood. Speaking of a CW sisterhood, I’m so curious about what happened with Shethority, which was started by a bunch of CW actresses. Patton was very involved in the beginning but seems to have pulled back.

-The Father of the Bride cast is reuniting for a new charity event.

-Bummer: Sofia Coppola‘s new film with Bill Murray and Rashida Jones is not getting good reviews.

-Have you seen Beyond the Lights? Gugu Mbatha-Raw plays a Beyonce wannbe and Minnie Driver plays her stage mom and it’s so, so good that I have no idea how come it isn’t more well known. In any case, I love that Mbatha-Raw is promoting another movie but willing to answer so many questions about that one.