–Angelina Jolie and her kids were spotted at the same concert as The Weeknd a week after they had dinner together, leading to renewed speculation they’re dating (even though they’re probably not).

-Speaking of hard-to-believe dating rumours, the one about Tom Cruise and Hayley Atwell has resurfaced.

-This headline makes it seem like it’s about how Kim Kardashian’s style has changed since leaving Kanye West, but it’s actually about how much he seemingly controlled what she wore.

–Millie Bobby Brown is reportedly dating Jon Bon Jovi’s son and wow this kid looks so much like his dad!

–Ariana Grande is honeymooning with Dalton Gomez in Amsterdam.

-After you’ve seen the movie, here’s a great piece on that controversial scene (which was written by director Nicole Holofcener!)

-Move over, Selena Gomez. Paris Hilton is getting her own cooking show on Netflix.

-The Hating Game is coming to theatres later this year. I know I need to temper my expectations because it likely won’t be as good as the book but I CANNOT WAIT.

-Three weeks after pleading guilty in his child endangerment case, Drake Bell has been sentenced to two years probation.

–Jodie Turner-Smith‘s jewels were stolen from her hotel room in Cannes. It’s believed she may have been targeted after wearing Gucci jewelry to her premiere. Though that jewelry was taken back after the premiere, the robbers stole jewelry worth tens of thousands of euros, including her mother’s wedding ring.

-I’m not sure I like what Bella Hadid wore to Cannes, but tree boobs are certainly one way to generate buzz.

-French actor Judith Chemla, the 37 year-old French star of Mes freres et moi, will not attend the world premiere of the film at Cannes today after she filed a complaint against the director Yohan Manca (who is also her boyfriend), alleging he threw a phone at her. Uh, maybe he’s the one who shouldn’t go?

-A spokesperson for Lea Seydoux confirmed she tested positive for COVID-19 despite being fully vaccinated and asymptomatic. She will remain in quarantine until her doctors deem her safe to travel to Cannes and attend festival events. Which should be, like, NOT before the fest is over, no?

–Vince Staples and Lil Nas X’s twitter exchange was hilarious. No one is doing socials right now better than this kid.

-Here’s another best TV of the year so far list. I would add We Are Lady Parts to this list, but I love that Girls4eva and Starstruck made it in there.

-The reviews for White Lotus, HBO’s new show that debuted last night, are glowing. It’s about wealthy people ruining the lives of various workers at a Hawaiian resort, and the cast is stacked!

-Speaking of TV reviews, the new season of Ted Lasso is getting praise (though the premiere reportedly gets off to a shaky start with a baffling storytelling decision critics aren’t allowed to spoil).

–Dwayne Johnson and Emily Blunt are in full promo mode for Jungle Fever, and this morning on GMA they surprised a custodian who got his degree in his 40s to become a teacher.

–Jessica Biel is stepping on Jessica Alba‘s turf by launching a wellness brand for kids.

-This is a good piece in the NYT about why lots of people have no plans to go back to the movies. Our theatres are opening again next week (after the longest closure in North America) and I can’t wait, but I get it.

–Jake Johnson says his new comedy indie movie Ride the Eagle is like “a sweeter companion piece” to New Girl, so I’m in.

–Matt Damon says he turned down James Cameron‘s offer of 10 percent of the Avatar profits to star in it, a payday that would have eventually totaled more than $280 million. Oopsie!

–Tom Cruise posted a video about going to see Tenet in a crowded theatre and saying “Welcome back to the movies everybody.” I know this was shot in London, but this still feels wildly irresponsible. It doesn’t help that he’s wearing a vented mask.

-I agree with this take on how Christopher Nolan has handled this whole thing has really soured my view of him.

-Some major film publications are refusing to review The New Mutants because Disney did not make screening links available or offer socially-distanced press screenings to film critics.

-In a new interview Jon Hamm says he’s already seen a cut of Top Gun: Maverick and gives it two thumbs up: “It just has that amazing Tom Cruise, tentpole blockbuster, summertime thing. It’s so good. Obviously, Tom knocks it out of the park and all the young kids are great in it. It’s the movie equivalent of a fist pump. You’re just like, ‘Yes!’ It’s exactly what it’s meant to be.”

–Meghan Markle and Gloria Steinem sat down to record a backyard chat to talk about representation, women’s rights, and voting. In the preview video, their dogs make a surprise appearance.

-I loved Fringe and am seriously considering a quarantine rewatch, but actress Jasika Nicole is right about how terrible the show’s running joke about mispronouncing her character’s name was. She also tweeted that at the beginning, she wasn’t given rides to work despite all the regular cast members getting it, and that one director refused to learn her name. “It was so bad that josh [Jackson] found a name tag, wrote the phonetic spelling of my name on it, and put it on his shirt, knowing the director would pay attention to HIM, might show me some respect that way. josh was trying to use his power/clout for good. Still didn’t work tho.”

–Jennifer Garner posted a cute video making fun of herself for crying over the finale of The Office.

-Great interview with 51 comedians on the jokes they’d like to steal if they could get away with it.

–Soleil Moon Frye pieced together hundreds of hours of footage she shot in the ’90s while growing up in Hollywood and cut it into a documentary that Hulu just picked up called KID 90. Look at these photos of her with baby Leonardo DiCaprio, Jared Leto, Tobey Maguire and Cuba Gooding Jr!

–Jake Johnson reading thirst tweets about himself is a good time.

-This is a good review of Lovecraft Country.  I was blown away by last week’s premiere, but the follow up episode was surprisingly shaky.

-Here’s Brendan Gleeson as Trump in the trailer for HBO’s limited series The Comey Rule.

–Natalia Dyer says she feels protective of her younger Stranger Things costars: “I generally feel like, to me, it’s oversexualizing them. I feel protective over the younger kids even though they’re not kids anymore, they’re teens. They’re all great people and all having to grow up in very crazy circumstances.”

-In the first Enola Holmes trailer, Millie Bobby Brown is on the case. Henry Cavill, Sam Claflin, and Helena Bonham-Carter costar in the upcoming Netflix film. This is a *very* good trailer!

–Kate Winslet and Saoirse Ronan fall in love in the trailer for Ammonite. It will premiere at TIFF — which, thanks to the fact that the festival will be mostly digital this year, anyone in Canada can get tickets to! Digital screenings are $19 each and you get the movie for 24 hours. Tickets go onsale to the general public on Sept 5. 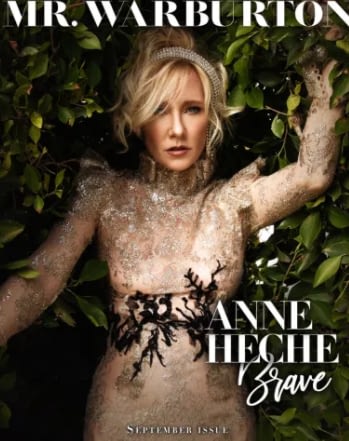 -If anyone was going to spill the tea about Ellen Degeneres, I expected it to be her ex, Anne Heche. But in a new interview, she says: “Our time was a beautiful part of my life and one that I wear with honour,” adding “I haven’t spoken to Ellen in years. I’d listen to the people who have.” She also praised a pair of male costars: “There have been two men who fought for me to be seen for my talent and not my headlines: Alec Baldwin and Harrison Ford.”

–Ryan Reynolds has sold his American Aviation Gin business in a deal worth up to $610 million.

–Ryan also recorded a message for BC after the province saw an uptick in cases among young people due to an increase of parties: “I hope that young people in BC don’t kill my mom or David Susuki…or each other. Let’s not kill anyone! I think that’s reasonable.”

-Meanwhile, Seth Rogen tweeted: “People of British Columbia! Please do not go out to parties and BBQs and other large gatherings! The COVID is still out there! It’s more fun to hang out alone and smoke weed and watch movies and TV shows anyway! Do that instead! Thank you!”

-On Saturday, Taylor Swift took to Twitter to accuse Trump of engaging in a “calculated dismantling” of the US Postal Service, adding he’s trying to “blatantly cheat” the election. Interestingly, this comes when she’s trying to make a foray back into country music.

-Meanwhile, Taylor revealed all the easter eggs in her “Cardigan” video.

–Cardi B had a 16-min Zoom chat with Joe Biden and asked him about healthcare and education for all, and police brutality.

–Brad Pitt and Jennifer Aniston are reuniting … for a table read of Fast Times at Ridgemont High.

–Angelina Jolie talked about the “chaos” of her household during covid: “I’ve been on high level meetings where there’s dogs and balls and kids and things. You kind of just enjoy being human with everybody else and laughing through it.” She says they’ve also been enjoying movie nights. “Well, we’re all there. So, all six kids, my oldest son’s home from Korea. Lots of popcorn and just like really every family, we’re just pajamas, robes, snacks.”

–Sharon Stone is urging everyone to wear their masks as she shared that her sister is battling the coronavirus, saying “One of you Non-Mask wearers did this.” She added that her sister’s husband is also fighting for his life, that her grandmother and godmother have already died of covid, and that healthcare workers and others can’t get tested in Montana, where her family lives.

-The Crown has found their Princess Diana for the final two seasons: Elizabeth Debick. I love her and this is exquisite casting.

-I love how much attention the Williams Twins are getting with their YouTube videos. Alicia Keys is the latest to shout them out for their review of her “Fallin'”.

-The @ArmasUpdates account does not seem to exist anymore and I am bereft.

-With production not yet returning on most shows, networks are having to get creative in how they film and where they find content to fill prime-time holes this fall TV season.

–Jensen Ackles has already lined up his post-Supernatural gig. He’s heading to the new season of The Boys.

-I had no idea that Lovecraft Country star Jurnee Smollett is the sister of embattled Empire alum Jussie Smollett.

-In the trailer for The Secrets We Keep, a housewife (Noomi Rapace) kidnaps her neighbor (Joel Kinnaman) and seeks vengeance for the heinous war crimes she believes he committed against her 15 years earlier. Chris Messina costars as her husband.