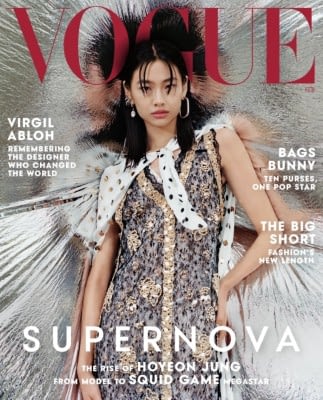 -Squid Game’s Hoyeon Jung is on Vogue’s February cover. She talks of how a lull in her modelling career led her to acting (“Getting farther away from other people’s gaze let me find what I wanted again and gave me time to study it. What’s important in life is not when your career is up, but when your career is down and how you spend that time. That’s something I learned”), the weightloss-inducing stress of becoming absurdly famous in the span of just a few days (“I don’t know why, but I couldn’t eat. I was so confused, and it was so chaotic. I didn’t believe it. I didn’t trust it”) and her future plans (“I have always wanted to go to Hollywood and to act in America, and I still do. But Squid Game changed my mindset. It doesn’t have to be an American movie or a European movie, it’s the story and the message that are more important”).

-In THR’s Actor Roundtable, Nicolas Cage, Peter Dinklage, Andrew Garfield, Jonathan Majors and Simon Rex share their fears about showing vulnerability, their sense of responsibility when wielding guns on sets, and their thoughts on the future of theatres. There’s also a hilarious exchange when Cage talks about filming with a horse called Rain Man that tried to kill him, and Majors says he’s also rode that horse. “I think I may have been older when I got him.” “I just wrapped three weeks ago!”

–Shonda Rhimes is on the latest cover of Time magazine. “I think the girlboss archetype is bullsh-t that men have created to find another way to make women sound bad.”

–Neve Campbell, Courteney Cox and David Arquette talk about returning to the Scream franchise in this new NYT interview. Said Arquette of the new film, “There were moments when I felt Wes’s spirit around a lot. There would be a wind blowing and I’d see Courteney’s hair move back. And then it’s just like” — he made an exaggeratedly mournful weeping noise. “It made it really easy to tap into those feelings.”

-A very pregnant Jennifer Lawrence did a round of quick-fire questions with Stephen Colbert.

–Jason Derulo got into a fight with two strangers in Las Vegas allegedly because they mistook him for Usher.

–Steven Soderbergh once again released his annual pop culture diary. I love how there’s prestige TV like Succession and Hacks, but also SO much Below Deck.

–Keanu Reeves continues to live up to our dreams; he reportedly donated 70% of his salary for the original Matrix film to cancer research.

–Jon Stewart has accused author J.K. Rowling of dealing in anti-Semitic tropes in her Harry Potter franchise, specifically the tellers at Gringotts Bank.

–Chris Noth was supposed to appear in a cameo in the finale of And Just Like That — but no more.

–Marisa Tomei did a “simple” makeup routine for Vogue and it is the only one I’ve ever watched that actually is simple.

-Omicron continues to wreak havoc on Hollywood. The Sundance Film Festival is going virtual only, the Palm Springs International Film Festival, the film academy’s annual Governors Awards, and the planned broadcast of the Critics Choice Awards have all been scrapped, and the Grammys are being postponed. Meanwhile, Grey’s Anatomy and a handful of other ABC shows have paused production.

-Two years after the fact, Gal Gadot has admitted that the “Imagine” video might not have been a good idea.

-The internet can’t stop making fun of Matt Damon’s crypto ad, and I’m here for it.

-What do you get the guy who has everything? Cardi B figured it out when she gave Offset his birthday present in public — a giant cheque for $2 million.

-In a new podcast, James Franco broke his four years of silence surrounding his sexual misconduct allegations. While he insisted his encounters were consensual, he did admit to sleeping with students in his film class, and said he had a sex addiction. “Over the course of my teaching, I did sleep with students, and that was wrong. But like I said, it’s not why I started the school and I wasn’t the person that selected the people to be in the class. So it wasn’t a ‘master plan’ on my part. But yes, there were certain instances where, you know what, I was in a consensual thing with a student and I shouldn’t have been.”

-Not surprisingly in light of recent allegations against him, Chris Noth‘s marriage is reportedly “hanging by a thread.”

-Actor Jay Johnston has reportedly been fired from Bob’s Burgers for attending the Jan. 6 insurrection.

-How was Denise Richards even allowed to board a plane without a mask?

–Jacob Elordi has reportedly moved on from Kaia Gerber with Olivia Jade (who I just realized are two different people).

-Selling Sunset couple Chrishell Stause and Jason Oppenheim have called it quits after just five months because they have different priorities when it comes to having children.

-This is an excellent oral history on the making of Scream.

-How cute was Keanu Reeves on Drew Barrymore‘s show? She also shared a lovely memory of him. “I was at this club, and it was my 16th birthday, and you came in — this is the memory I have of it, if you have anything to add or change, please let me know — you walked in, and you grabbed my hand, and you took me outside, and you put me on your motorcycle, and we drove at the warp speed of my life. We went and you took me on the ride of my life. And I was so free, I was such a free human being. And it was [this] moment where I just remember loving life and being so happy. I hold it so dear because the older we get, the harder it is to get to that feeling.”

-While Spider-Man’s insanely good box office returns is indisputably a big win for theatrical recovery, it also underscores that the massive divide between big, splashy tentpole films and everything else, a gap that was exacerbated by the pandemic.

–Tom Holland made good on his promise to bring a little boy who saved his sister in a dog attack to the Spider-Man set.

-Speaking of Spider-Man, I love all the praise Andrew Garfield is getting for his take on Peter Parker. They were my least fave SM movies, but I adored him and Emma Stone in them.

-Covid is messing everything up in Hollywood again, with a ton of productions and events getting cancelled.

-Wheel of Time is a hit (supposedly) for Amazon.

-The Return to Hogwarts trailer actually has me looking forward to this reunion special. But even if JKR isn’t in it, will she still profit from it?

-In this new deep dive by Variety, Blake Stuerman shared his first-person account about his four years with director Bryan Singer, saying it was abusive and traumatizing. Variety says they spoke with 20 people to corroborate it. Meanwhile, Singer’s lawyer says Stuerman “simply has an axe to grind.”

–Britney Spears’ dad is still being a jerk. Now he wants her to pay his legal bills.

–Willem Dafoe (who was the best part of Spider-Man: No Way Home) once needed a body double in a nude scene because — according to director Lars von Trier — “Will’s own [penis] was too big…too big because everybody got very confused when they saw it.” So there’s that.

-Spider-Man: No Way Home made even more money than the most optimistic predictions.

-Speaking of Zendaya projects, a new Euphoria trailer has landed! The series returns in a couple of weeks.

-This is a great profile on Melanie Lynskey, who is currently killing it on both Yellowjackets and Don’t Look Up.

–Keanu Reeves continues to cement his reputation as the best human alive by not getting fussed about how people watch the new Matrix movie. “I mean, sure, stream it if you have to.”

-Meanwhile, his Walk of Fame speech just consisted of him shouting out Toronto places and yet it made me very happy.

–The reviews for the new season of Emily In Paris suggests the show has slightly improved.

–Armie Hammer is front and center in the new Death of the Nile trailer, despite allegations of emotional abuse, manipulation, coercion and rape against him.