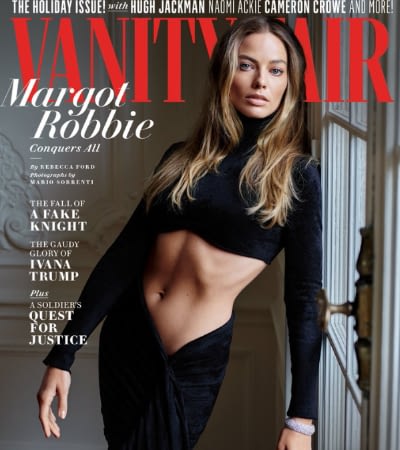 -Man, this Vanity Fair cover of Margot Robbie could have been published in the late 90s/early 2000s. It’s been a while since I’ve seen such a focus on a concave stomach and countable ribs. In the interview, she says the female-led Pirates of the Caribbean movie is dead at Disney. “We had an idea. We were developing it for a while, ages ago, to have more of a female-led—not totally female-led, but just a different kind of story…I guess they don’t want to do it.”

–Hunter Harries profiled Winston Duke for Esquire’s cover story and he tells her about his mother’s death (“There’s so much grief. It’s a strange feeling, grief, because it just erupts at any given moment. I feel like, at this moment, I need to sound positive, uplifting. But I don’t really have that”), and the type of movie roles he’s drawn to (“I want to lean into what I consider the epic. Black Panther’s an epic. I look at Nine Days as an epic. Us is an epic, the proportions and the scale. It’s that the world is ending, or that the stakes of the situation require major transformation to get through”).

–Gisele Bündchen appears to be dating her Jiu Jitsu instructor. Good for her.

-Speaking of new relationships, Pete Davidson and Emily Ratajkowski were spotted together.

–John Aniston, father of Jennifer Aniston and the man who played Victor Kiriakis on Days of Our Lives for three decades, has died at 89.

-Meanwhile, it’s hilarious to me that Yellowstone creator Taylor Sheridan is trying to walk back his previous anti-Trump quote. He clearly knows the show’s target audience. When asked in his new Atlantic profile about what he’d previously said, Sheridan responded “I don’t recall that.” And then, according to the interviewer, “agitated texts started coming in from the Paramount team. David Glasser, I was told, was upset. The publicists were upset. The higher-ups at Paramount were upset. Unless I promised to leave Sheridan’s Trump quote out of this story, I was told, a trip I’d scheduled to visit the Yellowstone set in Montana was at risk of being canceled.”

-Ted Lasso writers created a motivational message for each member of the U.S. Men’s National Team going to the World Cup. They’re posted on billboards in their hometowns.

–Kanye ‘Ye’ West’s fixation with Hitler and Jews goes back decades. The Wrap looked back his the songs, raps, statements repeating harmful stereotypes and focusing on Hitler dating back to 2005.

-Black Panther: Wakanda Forever set a new box-office record in its opening weekend, earning a whopping $180 million across the weekend, the biggest November opening ever in the US. Ryan Coogler is the first Black director with two films in the Top 15 biggest openings ever.

–Jay Leno suffered “serious” burns in a gasoline fire. A spokesperson said, “Jay wants everyone to know that he is in stable condition and receiving treatment … for burns that he received to his face and hands from a gasoline accident in his garage over the weekend.”

–Christina Applegate made her first public appearance since her MS diagnosis when she was honored at the Walk of Fame ceremony. It was attended by her Married…with Children co-stars Katey Sagal and David Faustino.

–Emily Henry is one of the five authors I see mentioned on BookTok again and again. I really liked Beach Read and Book Lovers (less so People We Meet on Vacation), but she has a new novel coming out called Happy Place. EW has an excerpt.

-This is a great profile of Sarah Polley ahead of Women Talking’s opening.

–Alec Baldwin has sued the Rust armorer and crew for giving him a loaded gun.

-In the midst of UK’s soaring energy costs, Kate Winslet has donated $20k to the GoFundMe account of a mom who was struggling to pay the electricity costs for her disabled daughter Freya.

-Director Paul Haggis was ordered to pay an additional $2.5 million in damages in his rape lawsuit, bringing the total to $10 million.