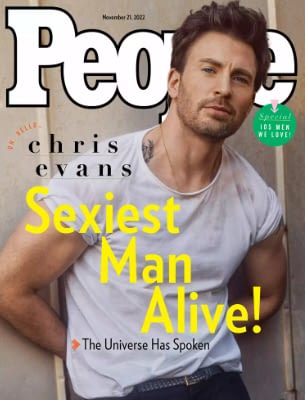 -People went the safe, inoffensive route and chose Chris Evans to grace this year’s Sexiest Man Alive issue.  The decision was announced on last night’s episode of The Late Show with Stephen Colbert, with an assist from John Oliver and Dwayne Johnson.

–Paul Mescal is profiled in GQ and says he talked in a Scottish accent for the entirety of Aftersun’s production but doesn’t want to be confused with a Method actor. “I don’t really go in for it. What I don’t like is the performance of how it’s like, more difficult. When you hear about actors essentially just fucking copying Daniel Day-Lewis, and copying stories about forgetting what his own fucking name is.” He also has no immediate interest in joining the MCU. “I feel kind of like ridiculous saying no when it hasn’t been asked, but it’s not something that I am pining to do. I don’t know if I would have the patience required. And I am deeply envious of people who do have that patience.”

-According to Jezebel, who got a screener of the Savage X Fenty show, Johnny Depp’s appearance amounts to a 40 second cameo. “It’s boring; so nonessential that I’ve yet to conclude why it was necessary at all.”

–Katy Perry posted a photo herself voting for the guy Chris Pratt just endorsed — and is getting dragged for it.

–Drake and 21 Savage are getting sued for his fake Vogue cover. Despite posting the cover under the guise of Anna Wintour’s blessing, it turns out Condé Nast is not happy about the stunt.

–Geri Halliwell celebrated her 50th birthday, and 4/5 Spice Girls were in attendance. Even better, David Beckham posted a video of them singing along to “Say You’ll Be There.”

-The NY attorney general says an LAPD captain warned CBS about a sexual assault claim against Les Moonves. “Somebody walked in the station about a couple hours ago and made allegations against your boss regarding a sexual assault. It’s confidential… but call me.”

–Shawn Levy, the director and producer behind Free Guy, Deadpool 3 and Stranger Things, is developing a Star Wars movie.

-ABC announced that the upcoming fifth season of A Million Little Things will be its last.

-Apple TV+ has renewed Sharon Horgan’s black comedy Bad Sisters for a season two. I still have to finish the season, but I’m really liking this show.

-A “minimal” amount of current CW shows will carry over into the next season, according to the new owners.

-Partner Track and The Imperfects were just cancelled at Netflix.

-Not every streamer is facing challenges like Netflix. Disney+ smashed analysts’ forecasts of an 8.9 million subscriber gain, closing its July-September quarter with 12.1 million new subscribers.

-The Crown’s Emma Corrin stars in a new trailer for Lady Chatterley’s Lover.

-Here’s the first teaser for Darren Aronofsky‘s The Whale, starring Brendan Fraser and Sadie Sink. I dunno; I saw it at TIFF and I found it both moving and problematic. There are going to be a lot of think pieces about this one leading into award season.

Wet Hot American Summer Is Back, But Are You Ready?