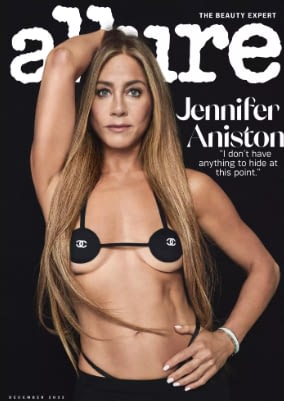 -The new Allure cover story on Jennifer Aniston is different from what we usually get from her — and not just because of the very un-her photoshoot. She also opens up for the first time about her fertility struggles, admitting that she was desperately trying to have a baby while tabloids were splashing fake headlines about her being pregnant practically every week. “It was a challenging road for me, the baby-making road…All the years and years and years of speculation… It was really hard. I was going through IVF, drinking Chinese teas, you name it. I was throwing everything at it. I would’ve given anything if someone had said to me, ‘Freeze your eggs. Do yourself a favor.’ You just don’t think it. So here I am today. The ship has sailed. I have zero regrets. I actually feel a little relief now because there is no more, ‘Can I? Maybe. Maybe. Maybe.’ I don’t have to think about that anymore.”

–Jennifer Lopez covers the Dec issue of Vogue and talks about taking Ben Affleck‘s name (“I just feel like it’s romantic. It still carries tradition and romance to me, and maybe I’m just that kind of girl”), and reconnecting with him after all these years (“You go through all these relationships, and you’re searching and you’re connecting and you’re disconnecting with people, and you’re like, ‘God, is this just what life is? Like a carousel, roller coaster, carnival ride?’ And then it settles”).

–Angela Bassett, Letitia Wright and director Ryan Coogler cover the new issue of Variety and talk about how their grief over Chadwick Boseman’s death inspired the $250 million sequel.

-Black Panther: Wakanda Forever might be the box office savior theatres have been waiting for. It scored $45m in advance ticket sales, and it’s projected to open at least $175m domestically this weekend.

-The reviews are strong, too. It’s currently at 85% fresh.

–Ryan Reynolds confirmed he wants to buy the Ottawa Senators, but joked he’s looking for a “sugar mommy or sugar daddy” to help him.

-The judge in Danny Masterson’s rape trial will allow a fourth woman to testify.

–Britney Spears reacted to Millie Bobby Brown saying she wanted to play the pop star in a biopic. Spears posted on Instagram, “I hear about people wanting to do movies about my life … dude I’m not dead !!!”

-Friday Night Lights stars Scott Porter and Zach Gilford are joining Parenthood’s Mae Whitman to host a podcast about the football drama. I want to listen to it but also don’t want to get sucked into a rewatch.

–Mike Birbiglia appeared on the Late Show with Stephen Colbert last night and said that when Taylor Swift texted him about appearing in her music video, he assumed he was being catfished.

-Ohhhh boy — the new season of The Crown dives into the “tampon” phone call between Charles and Camilla.

-In news that should surprise no one, the Deux Moi novel is not being well-received.

-Disney+ has released a trailer for the documentary Idina Menzel: Which Way to the Stage?

-A new trailer for I Wanna Dance With Somebody shows Naomi Ackie battling her father and defending her talents.