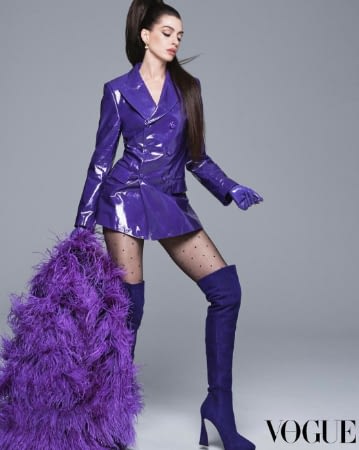 –Anne Hathaway‘s new film Armageddon Time may not be getting good reviews, but at least it got her back on the promo circuit. She’s on the cover of Vogue Hong Kong and talks about her goals as she approaches 40: “Surprise myself as much as possible. Surf more. Get a decent camera and use it often. Make as many memories with my family as possible.”

-In his delightful Vanity Fair profile, Succession’s Matthew Macfadyen was asked about costar Jeremy Strong‘s intense acting techniques, and said he hates the implication that actors who don’t stay in character “aren’t as invested, or as involved, as someone who’s weeping in a corner.” He added, “I find it slightly aggravating because—it makes [the show] about one thing, and it’s an ensemble piece. You think of J. Smith-Cameron and Alan Ruck, who are fucking extraordinary actors. [Strong] is not the main event…I look at Jeremy—that’s Kendall Roy, and so my heart starts banging a bit faster. Because I’ve made the imaginative leap. Because that’s my job. It’s not about what I’m feeling or what state I’ve got myself in before, or any of that. That’s not to say that’s wrong. That’s just not useful.”

–Leonardo DiCaprio and Gigi Hadid were spotted at a Halloween party together, so that’s still happening.

–Heidi Klum continues to go hard for Halloween. So does Janelle Monae.

–Billie Eilish and boyfriend Jesse Rutherford seemingly poked fun at their 11-year age gap with their Halloween costumes — she dressed like a baby and he wore old man makeup.

-One of Florence Pugh‘s friends went as Pugh at the Venice Film Festival drinking an Aperol Spritz instead of going to the Don’t Worry Darling press conference — and Pugh posted it.

–Donald Faison and his daughter recreated his role in Clueless.

–Mariah Carey‘s posts on Nov 1 at 12:01am never miss, and this year was no exception.

–Henry Cavill won’t be back for The Witcher after Season 3. Instead, the role has been recast with Liam Hemsworth. So Cavill got back in Superman’s cape and was done, huh?

-Wait, fans of Netflix’s Heartstopper forced one of the actors to clarify his sexuality?! He’s right; they missed the whole point of the show.

-This is an interesting look at the work that happens before a celeb wears a vintage piece on the red carpet.

-The cast for Severance season two has a bunch of new additions, including Alia Shawkat, Gwendoline Christie, Merritt Wever and Bob Balaban.

-Tragic: Julie Powell, the food blogger played by Amy Adams in the film Julie & Julia, died at age 49 in her New York residence of a cardiac arrest.

–James Corden shut down accusations of stealing Ricky Gervias’ joke: “Inadvertently told a brilliant Ricky joke on the show last night, obviously not knowing it came from him. It’s brilliant.”

-Steven Spielberg appointed two crewmembers to ensure E.T. was always operating in case a then-six Drew Barrymore went over to talk to him.

-Another Bridget Jones’s Diary sequel could be on the way. Should it, though?

–Cristin Milioti will join Colin Farrell in HBO Max’s The Penguin. I still can’t believe Farrell is going to put the fat suit back on to do this thing.

-A grown-up Ralphie is ready to spread some holiday cheer in the nostalgic first trailer for the Christmas Story sequel.

–Amy Adams squares off against Maya Rudolph in the trailer for the Enchanted sequel, Disenchanted.