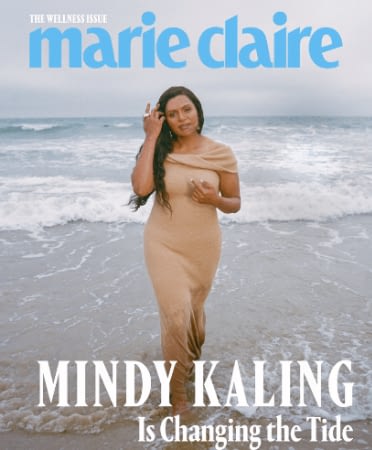 -In her new Marie Claire cover story, Mindy Kaling talks about how her priorities changed when she moved behind-the-scenes (“I think in my twenties I was only focused on, ‘Okay, I don’t want to get fired. I want to be successful’, and I was only thinking about myself. In no way was I thinking about things that are the most important to me now, which is my health, holding the door open behind me for other people”) and the relief of being off-camera (“The amount of articles that were like, ‘It’s so good for a culture that this unattractive woman is finally on camera.’ I didn’t know I was so unattractive until I was the star of my own show. So not having to see those things, that’s wonderful”).

-There was lots of chatter about who was going to be on the cover of Vogue’s September issue because everyone reportedly had to sign NDAs, and now it makes sense: Serena Williams used her cover story to announce she’s planning to retire from tennis after playing in this year’s U.S. Open. “I’m here to tell you that I’m evolving away from tennis, toward other things that are important to me…I have never liked the word retirement. It doesn’t feel like a modern word to me. I’ve been thinking of this as a transition…Maybe the best word to describe what I’m up to is evolution.”

–Taika Waititi and Rita Ora are reportedly married. A source tells The Sun the pair wed in an intimate ceremony in London, and she’s changed her surname to Waititi-Ora.

–Pete Davidson is reportedly in trauma therapy as a result of Kanye West’s attacks on social media.

-Several of the female crew members on the Wonder Years reboot described Fred Savage’s behavior they say led to him being fired. Six women united to report him to Disney HR for alleged verbal abuse and his particular interest in one much younger crew member.

-Once again proving there’s no such thing as cancelation, Johnny Depp has signed a seven-figure deal with Dior to once again become the face of its Sauvage fragrance for men. I do wonder if the tide is turning for him, though. The past week’s social media has been filled with fans seeming shocked and outraged by the unflattering info in the recently unsealed court docs (though frankly, it’s nothing new for anyone who was actually paying attention and not just getting all their info from stan TikTok.)

-I’m trying to watch The Sandman but as someone who hasn’t read the source material, I’m finding it a little impenetrable. Still, I liked this article on the timely return of the emo leading man.

-Meanwhile, based on Netflix’s self-reported numbers, The Sandman had a good opening weekend.

-I’m having a much easier time watching the final episodes for Better Call Saul, which have been *chef’s kiss*. Here’s a good interview with Vince Gilligan on why he’s done with the Breaking Bad universe after he wraps up the series next week.

–Talib Kweli is suing Jezebel for emotional distress that he claims was caused by their 2020 story, “Talib Kweli’s Harassment Campaign Shows How Unprotected Black Women Are Online and Off.”

–Sean Bean said that intimacy coordinators “spoil the spontaneity” of a sex scene and his Snowpiercer costar Lena Hall was like uh, no.

-TIFF’s official announcement of its closing night pick, Daliland, left out Ezra Miller from the cast list, even though he plays a young Dali.

-The first trailer for Palme d’Or winner Triangle of Sadness has arrived.