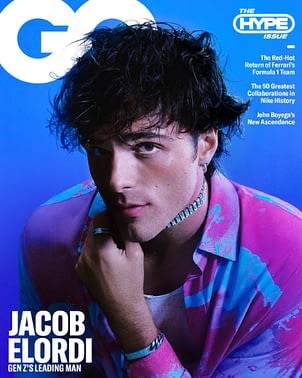 –Jacob Elordi covers GQ and says it’s “bullshit” that Netflix didn’t let him smoke in The Kissing Booth (“I remember saying, ‘He smokes in the book. He needs to have cigarettes…Are we lying to the fucking millions of 14-year-olds out there? This guy smokes nicotine'”). He also talks about Euphoria’s long, chaotic hours (“For me, working on that set is an absolute treat. When I’m working with Sam [Levinson], I’m in the trenches with him, and I trust him, and I work myself to the bone for him. I think I’ve read people saying, ‘Look, that’s a bad image to set, you shouldn’t have to work yourself to the bone for art.’ Fuck that. I enjoy it. What everyone’s seeing on television, the shots that people are talking about, the feelings that they get, the conversation that’s around the show, that’s because certain shots take 30-something takes.”)

–Renée Zellweger says she became “more authentically” herself after turning 50.

–Ezra Miller was just charged with felony burglary in Vermont, stemming from an incident on May 1 when several bottles of alcohol were taken from a residence while the homeowners were not present. I’m going to need to construct a string map to plot all the allegations against this guy soon…

–Olivia Newton-John has died at 73 after battling breast cancer.

-Even though Kim Kardashian and Pete Davidson broke up, Kanye West is still trolling him. He posted a fake obituary for “Skete Davidson.” Kardashian is reportedly “appalled” by the post.

–Rosario Dawson is quickly walking back her comments about Jon Bernthal returning to play Punisher on Disney+, saying she heard the rumour from a fan. My guess is she got her hand slapped for announcing it too soon. Now if they could just confirm Deborah Ann Woll‘s return, my Kastle-shipping heart will be happy.

-After crashing her car into a house, Anne Heche’s condition sounds far graver than it was first reported over the weekend. A rep tells Deadline, “At this time Anne is in extreme critical condition… She is in a coma and has not regained consciousness.”

–Beyoncé’s Renaissance marks this year’s biggest debut by a woman.

-Meanwhile, I love her remix of Vogue, in which she replaces all the people Madonna lists in the original with Black women.

–Kevin Federline could have just … not.

-A photo circulated around Twitter this weekend of Austin Butler‘s ex-girlfriend Vanessa Hudgens meeting his current girlfriend Kaia Gerber when she was a legit child, and it’s so disturbing.

-Also gross: Dane Cook reportedly met his 23-year-old fiancée when she was a teen.

-I’m convinced Lea Michele knows all about the conspiracy theories surrounding her supposed inability to read and did this video just to troll everyone.

–Tom Cruise and Christopher McQuarrie are still working on Mission Impossible 8, but they’re already charting their next movies: a new action franchise, an original musical, and the return of Cruise’s Tropic Thunder character Les Grossman. I wonder how the latter will play these days? Fat suits and parodies of Weinstein-type producers don’t really hit like they used to…

–Thandiwe Newton gets entangled in a feud with hunters trespassing on her land in the trailer for God’s Country.

The X Files Is Probably Going to Continue, Whether We Want It To Or Not