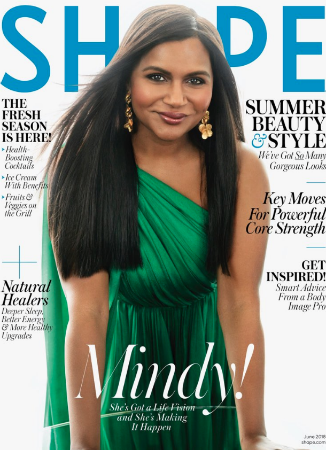 -I love that Mindy Kaling is Shape’s latest cover model — which isn’t a typical choice for them. I skimmed over the stuff about losing the baby weight, but she has some cute nuggets about motherhood: “What’s great for me is that my doctor told me that incessant chatter is good for a baby, and I’ve lived my whole life waiting to have a captive audience. So, I spend the days narrating to her. I’m constantly doing voice-over for her, as I did in The Mindy Project. Honestly, I feel like her first words are going to be, ‘Just stop. Please!'”

–Dylan Sprouse is out here coming for Jared Leto, proving once again that he’s the superior Sprouse brother. And Guardians of the Galaxy director James Gunn took it further, tweeting “he starts at 18 on the internet?” Oh SHIT!

-Lethal Weapon producers reportedly approached  Karl Urban and Johnny Knoxville (both passed) before turning to Seann William Scott, who was originally offered and passed on the role two years ago.

-Fashion drama is the best drama. Amal Clooney reportedly made Tom Ford mad by not wearing his dress at the MET gala arrivals — but opting to wear it later that night, which means that another A-lister won’t get to debut it at a future red carpet event.

-Those rumours about Donald Glover getting his own Lando movie are not true…yet.

-This Instagram story of Fergie having to take the subway because of a rainstorm is hilarious because it’s presented like she’s the first person who’s ever braved public transit.

-I gotta say, I did not expect so many Mulroney kids to be in the royal wedding party.

-This “bad fan” thread between TV critics on The Americans really captured what I am feeling. I know it’s bad to *want* them to end the show with Elizabeth and Phillip getting away with it, but that’s where I am.

–CBS responded to Pauley Perrette’s tweets claiming she was physically assaulted while on NCIS: “Over a year ago, Pauley came to us with a workplace concern. We took the matter seriously and worked with her to find a resolution. We are committed to a safe work environment on all our shows.”

–This non-review of Lars Von Trier‘s new film by a critic who walked out of it at Cannes confirmed that I will never, ever see it.

–Christina Aguilera and Demi Lovato released a new collab any instead of it being a bop it’s … this.

-The second season of 13 Reasons Why is NOT getting good reviews. I’m ok with that. I just don’t think I can spend any more time in that world.

–Stephen Amell took his daughter to Frozen on Broadway, and since his former Arrow costar’s wife plays Anna, she got some extra facetime. The kid decided to use it in the cutest possible way.

-The latest trailer for Mission Impossible: Fallout shows off an insane skydiving stunt.

-This trailer for Destination Wedding, which basically consists of Winona Ryder and Keanu Reeves snarking at each other in Paso Robles wine country, looks like the perfect movie and I will not be convinced otherwise!