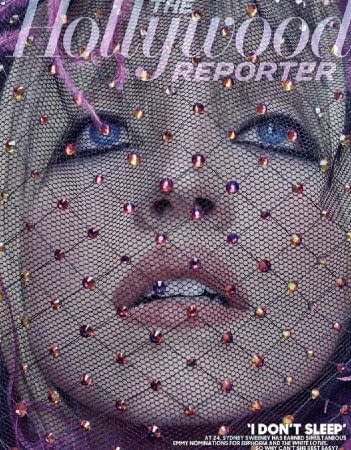 –Sydney Sweeney is THR’s new cover star, and talks about feeling pressure to keep her momentum going (“I still can’t get my mind to shut up, and I don’t sleep”), how she couldn’t afford to take a six-month break from acting (“I don’t have income to cover that. I don’t have someone supporting me… They don’t pay actors like they used to, and with streamers, you no longer get residuals”), and her Euphoria character’s downturn (“I feel really bad for Cassie; she’s losing herself so much. But I thrive doing that shit. People talk about how heavy this season is, but I love it”).

-It’s interesting to see the Kardashians fight to keep Instagram from turning into TikTok, especially because they’re so big on IG but haven’t really seemed to master TT. Meanwhile, Instagram is like “nah, we’re going keep doing more TikTok-style videos.”

-While promoting her new memoir, Mena Suvari opened up about being raped at 12 by a friend of one of her older brothers.  “That sucked the life out of me. I think that was just excessive confirmation that no one was going to save me, no one was going to do anything for me.”

–Harry Shum Jr. has joined the cast of Grey’s as a first-year surgical resident.

-The Desus and Mero conspiracy theorists are running wild.

–Kate Winslet has joined the cast of the HBO limited series The Palace — her second HBO series she’s signed on to this month.

-This interview with a VFX artist about working with Marvel is eye-opening. Not only do they say they’re underpaid and overworked, but apparently the D.P. bails on post-production so they’re just coming up with shots on the fly.

-Nobody seemed to like Netflix’s The Gray Man, but people must have watched it. It’s getting a sequel and a spinoff.

-God, I love that Jon Bernathal is having a moment.

–Jane Lynch, what are you doing?

-I’m liking everything about the A League of Their Own series trailer.

-Here’s the Pearl trailer, directed by Ti West and starring and co-written by Mia Goth.

Tributes Pour in for James Gandolfini from Celebrities, Costars