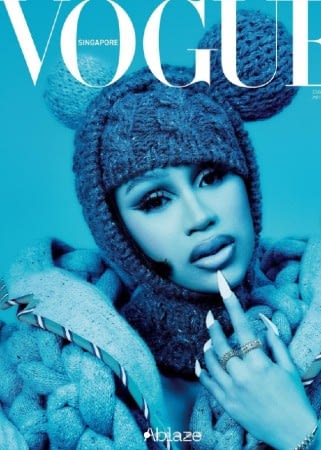 –Cardi B covers Vogue Singapore and talks about her new song “Hot Shit”: “I needed a masculine record. Sometimes, my records are very girly—like ‘WAP is a girly anthem. ‘Up’ was meant to be more gangster, but people took it as girly as well. So this one, expect it to be my ‘hiyaaaaah!’ record.”

–Bradley Cooper and former Hillary Clinton aide Huma Abedin are reportedly dating after being set up by Anna Wintour.

-Ahead of the trial, Johnny Depp has settled the lawsuit filed by Greg Brooks, the location manager for City of Lies who claims the actor assaulted him in a drunken rage.

–Pete Davidson made his debut on the Kardashians‘ reality show. I must admit, this clip is cute.

-Yellowstone actress Q’orianka Kilcher has been accused of worker’s compensation fraud after allegedly claiming disability benefits despite working on the hit series.

–Lady Gaga‘s dancers are reportedly fleeing her tour just days before it starts because of her choreographer.

-If it’s true that Beanie Feldstein “blindsided” Funny Girl producers by announcing her departure on Instagram a day before they could do it themselves, then I love that for her.

-Oof, Netflix’s Persuasion, which drops this weekend, is only 33% on Rotten Tomatoes and is getting savaged by critics. “It’s as if someone tried to recreate Emma from memory, but they’d only watched the film on a plane, and while the plane was experiencing extreme turbulence.”

–Tessa Thompson loves when LGBTQ fans tell her how her Thor character has inspired them to live their truth. “I’ve had so many folks write me and say that they were able to come out or to talk to their family, which is a dream.”

–Ebon Che, who steals all his scenes in The Bear, discusses crafting his character’s braggadocio, his love for Punisher costar Jon Bernthal, and why his character is quick to trash the Snyder Cut.

-Netflix is getting in on the fake marriage trope and I’m here for it. Sofia Carson and Nicholas Galitzine play strangers who agree to wed solely for military benefits in the Purple Hearts trailer.