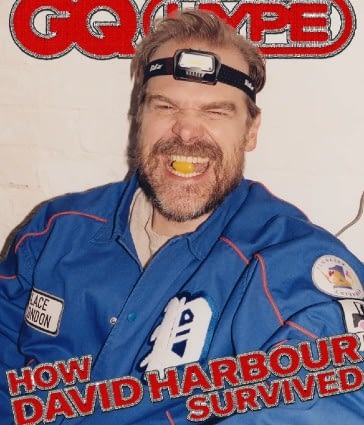 –David Harbour covers British GQ and talks about his early dates with Lily Allen (“I remember the exact moment. It was our third date. I was just in this phase, where I was like, ‘I’m just going to be brutally honest about everything, because why lie?’ And I told her something about my life, about my beliefs…It would take a really extraordinary person to be accepting of the things that I said. And I remember thinking: Wow, that’s somebody I want to be around”), and his opinion on method acting (“Not only is that stuff silly, it’s dangerous, and it actually doesn’t produce good work…[Daniel Day-Lewis] is an extraordinary actor who I’m captivated and fascinated by. [But] when he explains his process it sounds like nonsense to me”).

-Speaking of going for it on a first date, Megan Fox says she jumped into the probing questions with Machine Gun Kelly. “I just asked him: Were you breastfed by your mother? It was a great question because it has a lot to do with your psychology and your temperament. I ask things like that. I like to go in deep right away!”

-The rumour that Armie Hammer was working as a personal concierge at a resort in the Cayman Island has died a sudden death. It was fun while it lasted though, no? Apparently, Hammer has been living at the hotel and golfs with some of the staffers, and they pranked him by putting his photo on the concierge flyer.

–Doja Cat DM’d Stranger Things teen Noah Schnapp to ask him to set her up with his costar Joseph Quinn, who plays Eddie.

–Elon Musk reportedly welcomed twins last year with one of his top executives, just weeks before his daughter with Grimes was born. In response, he tweeted “Doing my best to help the underpopulation crisis. A collapsing birth rate is the biggest danger civilization faces by far.” You can’t make this stuff up…

–Natalie Portman is pulling back the curtain on Thor: Love and Thunder: “There’s one scene that’s one of the most visually beautiful scenes I’ve seen on film, and we shot [it] in real life in a Best Buy parking lot.”

-Cheer star Jerry Harris was sentenced to 12 years in prison for requesting explicit photos and soliciting sex from teenagers at cheerleading competitions.

-Eight anonymous TV showrunners opened up about how it feels when your show’s fate is a black box because streamers won’t tell you the ratings. “I was given the opportunity to see graphs but not graphs with numbers on them. I had no idea whether it was like, ‘You had 400k viewers’ or ‘You had 3M viewers and we wanted 5M.'”

-The Benny Hill theme tune was blasted outside Parliament live on TV ahead of Boris Johnson’s resignation – and Hugh Grant was behind it.

–James Caan, the legendary actor who starred in The Godfather, Misery, Elf so much more, has passed away at 82.

-I thought The Flash’s Danielle Panabaker just had a baby, but she just welcomed her second child.

-The Bear continues to get rave reviews.

–Regina Hall and Sterling K. Brown star in the new trailer for Honk for Jesus. Save Your Soul.

Shailene Woodley Is On a Mission

Miranda Kerr Strips Down for GQ