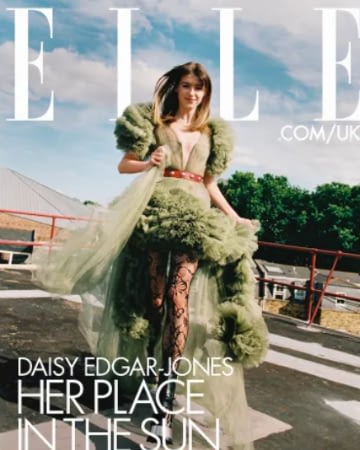 –Daisy Edgar-Jones is on the gorg new cover of Elle UK, and talks about growing up an only child (“We get a hard rap but being an only child was great. I’m very good at making friends. I remember going on holidays as a child, seeing kids playing in the pool and having to go up and ask, ‘Can I play?’ It was a good life lesson”) and working on Where The Crawdads Sing, which was produced by Reese Witherspoon (“I grew up watching Reese so it was a big moment. She has such an amazing eye for complicated characters and stories that are predominantly female-led”).

-I love that The Bear is getting Jeremy Allen White the attention and critical acclaim he didn’t get from Shameless. In his new GQ profile, he talks about how hard it was to do that show for 10 years. “I love everybody that was a part of it, and the experience was incredible. But I’m not sure if shows are meant to go that long…There was a period where I stopped feeling like an actor and I started feeling like I was just here to do this show.”

-I finally got around to reading Kim Kardashian’s Allure cover story and when she talks about everything she has or has not done to her face I just … don’t believe her?

-Did Twitter will this into existence?!? Lea Michele will take over the title role of Funny Girl’s Fanny Brice from Beanie Feldstein. (See, dreams can come true — even if you’re reportedly a monster to work with!) After months of replacement rumours and terrible reviews surrounding Feldstein’s performance, the official announcement came a day after Feldstein said in an Instagram post that she had decided to depart Funny Girl July 31, earlier than anticipated.

-But it won’t be a Glee reunion. Jane Lynch, who plays Mrs. Brice in Funny Girl, is also leaving the production earlier than expected and will be replaced by Tovah Feldshuh starting on Sept. 6.

–Florence Pugh spoke out against those who criticized her sheer Valentino dress during Rome Fashion Week: “What’s been interesting to watch and witness is just how easy it is for men to totally destroy a woman’s body, publicly, proudly, for everyone to see. You even do it with your job titles and work emails in your bio..?” Bridgerton’s Regé-Jean Page also defended her, reposting her post in his stories and adding, “Take a look at yourself fellas. Then take a look at your mates and step up when it’s time to step up. When the boys are out of line, have a word. The weird thing about misogyny is men actually listen to other men, So do your bit, cos the next few years in particular are gonna be a really good time to listen, and take some responsibility, for everyone’s sake.”

-In an new interview, Natalie Portman opened up about what it was like to bulk up for the new Thor movie. “It’s pretty unusual and wonderful to be tasked with getting bigger as a woman…I turned 40 while making the movie and it was an incredible point in my life to say, ‘You’re going to be the fittest, strongest version of yourself.'”

-Don’t read this until after you’ve watched Thor: Love & Thunder, but here’s a good rundown of the post-credit scenes. The reveal of who’s playing Hercules made me gasp a little.

-Also, the kid who plays Gorr’s daughter (and ends up sharing some scenes with Chris Hemsworth) is Hemsworth’s kid in real life. Meanwhile, his wife and twin sons, Natalie Portman and Christian Bale‘s children, and one of Taika Waititi’s daughters are featured as extras in the film.

-With all the talk about how little VFX workers get paid and how horribly rushed they often are, we didn’t need a video of Taika Waititi and Tessa Thompson making fun of the Thor effects.

-In her latest newsletter, Jennifer Lopez opened up about her history of panic attacks until she changed her lifestyle. “There was a time in my life where I used to sleep 3 to 5 hours a night. I’d be on set all day and in the studio all night and doing junkets and filming videos on the weekends. I was in my late 20s and I thought I was invincible. Until one day, I was sitting in a trailer, and all the work and the stress it brought with it, coupled with not enough sleep to recuperate mentally, caught up with me…I was completely frozen.”

-This is brutal for everyone who worked on TBS’ Chad: just hours before its premiere, the already filmed second season of the comedy created by and starring SNL alum Nasim Pedrad was pulled from the schedule. It’s the latest TBS casualty of the WarnerMedia-Discovery merger.

-A week before her trail’s start date, Real Housewives of Salt Lake City star Jen Shah pleaded guilty to wire fraud charges stemming from an alleged telemarketing scam (charges she previously pleaded not guilty to). She’s agreed to not appeal the decision if she’s sentenced to less than 14 years in prison.

-On a new podcast, The Flash’s Candice Patton has opened up about how the network did nothing to protect her from trolls, especially when the show first started (“It was just free range to get abused every single day. There were no social-media protocols in place to protect me. They just let all that stuff sit there”), said her publicist had to ask the show’s official IG account to follow her even though they were already following her white costars, and talked about how her hairdresser wasn’t well-versed in Black hair and she had to bring her own makeup to set. “I think so often about how much better my performances could have been over the last seven years if I wasn’t in a constant state of fight or flight and trauma.”

–Shawn Mendes announced he’s postponing his tour for three weeks to focus on his mental health.

–Jamie Foxx is just trying to make a living as a vampire hunter in the trailer for Day Shift, costarring Dave Franco and Snoop Dogg.

Kimye Gets in Bed with Harper’s Bazaar