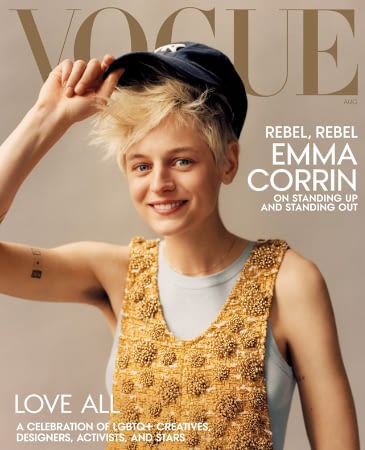 –Emma Corrin covers Vogue and I love the vibe of the photos almost as much as I love the interview. They talked about the comments they got on a recent Instagram post about chest binding (“In my mind, gender just isn’t something that feels fixed and I don’t know if it ever will be; there might always be some fluidity there for me”),  their pronouns (“I feel much more seen when I’m referred to as ‘they,’ but my closest friends, they will call me ‘she,’ and I don’t mind, because I know they know me”), and dating (“I like people…I’m working out all this complex gender and sexuality stuff. And yet, I’m seeing a guy? That feels very juxtaposed, even if I’m very happy”).

-In a new interview with GMA, Hayden Panettiere opened up about her struggles with alcoholism and postpartum depression. She also did a People cover story and said her handlers used to give her “happy pills” before red carpets when she was 15.

-I don’t think billionaires should ever exist, but if I was going to give one of them a pass it would be Rihanna. She just became the youngest self-made billionaire in the US at just 34.

–Brad Pitt says he has face blindness and it makes people mad. “So many people hate me because they think I’m disrespecting them. So I swear to God, I took one year where I just said, ‘This year, I’m just going to cop to it and say to people, ‘Okay, where did we meet?’ But it just got worse. People were more offended…You get this thing, like, ‘You’re being egotistical. You’re being conceited.’ But it’s a mystery to me, man. I can’t grasp a face and yet I come from such a design/aesthetic point of view. I am going to get it tested.”

-The first trailer for Reservation Dogs season 2 is here — and Megan Mullally has joined the cast.

–Adam Sandler joined in on a basketball game in Toronto.

-Here’s a look at the last episodes of Better Call Saul.

–Paul Rudd remains one of the good guys.

-A ton of new trailers dropped today. First up is Kevin Smith‘s return to the convenience store with Clerks III.

-The new Persuasion teasers feel different than the first trailer, thank god. I can’t believe they turned a book about melancholic longing into a smirkfest. I’m still praying this line is a joke and not actually in the film.

-Here’s the trailer for David O. Russell’s Amsterdam, starring Christian Bale, Margot Robbie, John David Washington, Taylor Swift, Chris Rock, Robert DeNiro, Remi Malek, Anya Taylor-Joy and more. This man got into a fistfight with George Clooney, made Amy Adams cry onset every day, and is accused of groping his trans niece, and yet look at all the A-listers still lining up to work with him…