First headshot. Apparently I was hoping to be cast as a dickhead. #TBT pic.twitter.com/fACbKBJUpF

–Chris Evans shared his terrible first headshot and the internet is having a field day dunking on it.

–Jennifer Aniston revealed her 50th birthday trip to Mexico with Courteney Cox and Jimmy Kimmel‘s wife, Molly McNearney, turned scary when one of the plane’s wheels fell off. She also revealed that McNearney texted Kimmel that she loved him and that he’d “always been an incredible husband” — to which he replied “I just signed up for Tinder, but I promise not to activate it until we know what’s what.'”

-Sorry, ladies. Keanu Reeves‘ rep is denying the quotes in which he said he was lonely and looking for love.

-I’ve never seen Deadwood but I’m so happy for its fans that HBO is airing the movie revival tonight. It sounds like a love letter to the show.

-Not all Game Of Thrones fans are writing whiny petitions. As a counterpoint, fans have raised more than $125K for charity to thank the show’s stars. Emilia Clarke posted an emotional video thanking them for their donations.

–Diplo insists he didn’t ruin Joe Jonas and Sophie Turner‘s secret wedding by livestreaming it — despite Jonas and Turner both voicing their displeasure about it in separate interviews.

-The NBA reportedly had a chat with Drake about his courtside antics before the finals.

-I don’t usually get moved by reality TV but between this clip of a blind contestant on MasterChef, and this autistic contestant on America’s Got Talent, I’m a blubbery mess.

-The reviews are in for Big Little Lies season 2, which critics seem to find a bit more scattered than the first season, but everyone agrees that Meryl Streep steals the show.

–Kate McKinnon appeared on Billy on the Street — where she pretended to be Reese Witherspoon.

-It’s supposed to rain a lot this weekend, but at least there’s a ton of good TV and movies dropping: Ali Wong‘s Netflix romcom Always Be My Maybe, Amazon’s Good Omens, and Ava Duvernay‘s Netflix mini-series When They See Us — all which are getting glowing reviews.

–Jon Hamm signs all of his emails “HAMM” and I wouldn’t want it any other way.

-Jesus, John Cleese. It was bad and now you’re making it worse.

–Robert Pattinson has officially been confirmed as the new Batman. I have no doubt he can do broody and gothic, but I definitely agree with this thread that it’s a very weird career choice for a guy who’s purposefully eschewed fame/the spotlight thus far.

-Also, I can’t believe the movie is going to feature get another take on Batman’s origin story. I never, ever again need to sit through another scene of Martha Wayne’s pearls tumbling to the ground.

-Wait, Aya Cash is in Fosse/Verdon?! God, I need to watch this thing.

-There’s rumblings of an Ally McBeal reboot. I’d much rather they just stream the original somewhere. Robert Downey Jr. was at his most charming in that show.

-I love that the entire internet is obsessed with Fleabag’s black jumpsuit.

-AMC, which films The Walking Dead in Atlanta, says they’ll “re-evaluate” if the abortion bill goes into effect there .

First look at @Rihanna's Fenty collection at her pop-up in Paris: https://t.co/KU0Uqg8Vlt pic.twitter.com/dseHhqadQu

–This video that Rihanna shot for British Vogue has everyone realizing that we’ve been pronouncing her name wrong all this time. She say “REE-anne-a” instead of “Ri-AHH-na”.

–Meryl Streep doesn’t like the term “toxic masculinity,” saying: “We hurt our boys by calling something toxic masculinity. And I don’t find putting those two words together [works] because women can be pretty f***ng toxic. It’s toxic people.” Um Meryl, I love you to the moon and back, but “toxic masculinity” doesn’t mean that men are toxic. It’s referring to the very specific, very gendered behavior of incels and their ilk.

-When asked about his love life while promoting John Wick 3, Keanu Reeves said “You mean romantic love? You know, I’m the lonely guy. I don’t have anyone in my life. But if it does occur, I would respect and love the other person; hopefully it’ll happen for me.” The line forms behind me.

–Shailene Woodley horrified Ellen Degeneres by admitting that she doesn’t floss her teeth.

–Sally Rooney‘s book Normal People (which I liked but still don’t quite get what all the fuss is about), is going to be a Hulu series.

–R. Kelly is facing 11 new felony counts of sexual abuse, which carries a maximum of 30 years in prison.

-The Chicago police just released the first round of case files surrounding Jussie Smollett after a judge ordered them to be unsealed last week.

-I am very here for New Girl’s Jake Johnson to be back on my TV screen.

–Sacha Baron Cohen confirmed the long-held rumour that Borat is what led to Pamela Anderson and Kid Rock’s divorce.

-This is an interesting take on how fans feel like they were fooled by Morrisey because they mistook his far right views for just being a shy misfit.

-The reviews for the new season of The Handmaid’s Tale are good but not great.

–Marianne Jean-Baptiste and Gwendoline Christie star in the Fabric trailer, which looks weird AF and I dig it.

–The Kitchen trailer, starring Melissa McCarthy, Tiffany Haddish, Elisabeth Moss and Margo Martindale, features three women who join the Irish mafia while their husbands are in jail. It kind of looks like The Widows but is set in the 70s. I’m here for it! 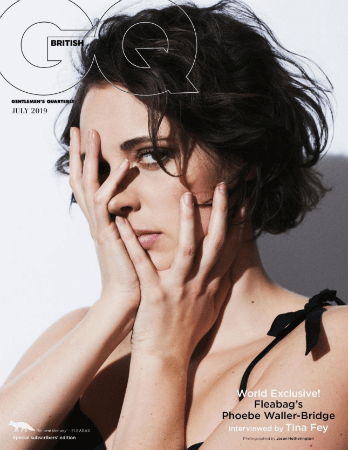 -It’s a banner day for us Phoebe Waller-Bridge fans. Tina Fey interviewed her for British GQ, where she talked about the critical reception to Fleabag (“The British press were like, [it’s] is the filthiest, most overly exposed, sexually exposing show ever.’ They made out like I was naked the whole way through. I was like, ‘There is not a moment of nudity in the series.’ I just say stuff about my asshole straight down the barrel. I think that makes people feel so naked, but the language was more naked than the actual performance.”)

–Waller-Bridge is also on the cover of The Hollywood Reporter’s comedy actress issue, alongside Tiffany Haddish, Jane Fonda, Maya Rudolph, Natasha Lyonne, Alex Borstein and Regina Hall. She talks about why she loves writing Fleabag: “I write women who don’t give a shit because I am teaching myself how to be one. I just feel such a catharsis when I turn to the camera and just say that f**king line and it’s just such an amazing feeling. I’d like to be more like that.”

-Following the Natale Portman kerfuffle, Moby has called off the rest of his book tour as well as “all upcoming public appearances for the foreseeable future,” saying “I’m going to go away for a while.”

-As if we needed another reason to stan her, Meghan Markle has reportedly bowed out of meeting Trump.

–Prince Harry took a commercial flight and his fellow passengers couldn’t help but sneak pics of him.

-This makes a lot of sense: CBS announced it will air season 1 of CBS All Access’ The Good Fight this summer, beginning June 16. While I think season 2 is better, this whole show is so, so good!

-I was scared to see Alex Trebek‘s name trending earlier today, but it’s good news! A few months after revealing he had stage 4 pancreatic cancer, he says he’s “near remission,” telling People: “It’s kind of mind-boggling … The doctors said they hadn’t seen this kind of positive result in their memory … some of the tumors have already shrunk by more than 50 percent.”

–Laura Dern just graced us with this perfect IG post and the world doesn’t deserve her.

–Ashton Kutcher testified today in the murder trial for the man accused of killing his friend, Ashley Ellerin. The actor testified that he went to Ellerin’s house the night she was murdered to pick her up for drinks, but there was no answer so he assumed she wasn’t home. He said when he looked in her window, he saw what he thought were red wine stains on her carpet.

-This video of Will Smith talking to kids at the Aladdin premiere is all kinds of precious.

-While doing press for Avu DuVernay‘s new Netflix series When They See Us, Joshua Jackson talked about confronting his blind spots as a white man. DuVernay praised his comments, tweeting: “When I first met with [him], I didn’t know what to expect. Certainly not THIS. Had never had a convo like that with a white actor. He surprised me in the most unexpected, beautiful way.”

-When They See Us star Aurora Perrineau talked to Glamour about the series, as well as that apology she got from Lena Dunham, who initially didn’t believe Perrineau’s allegations that Girls writer and exec producer Murray Miller had assaulted her when she was 17.

-Netflix changed its thumbnail for Nailed It! when host Nicole Byer criticized it for whitewashing the show.

-The current showrunner of The Chi, who started in season two, has gone public on the misconduct claims surrounding actor Jason Mitchell, telling the Hollywood Reporter: “I became a target of his rage and inappropriateness, and had to report him to HR, as well…. Ultimately, everyone was well aware of Jason’s behavior and his multiple HR cases, including Lena [Waithe].” Meanwhile, show creator Waithe maintains that she was told of the actor’s alleged actions only after the first season wrapped. (Even if that’s the case, the show didn’t drop Mitchell until its current third season.)

-I really liked these details about the vocal-technique work Michelle Williams did to prepare for her performance in Fosse/Verdon. I definitely need to catch up on this show.

–Ansel Elgort posted 17 shirtless pics in a row on Insta, and everyone is very confused.

-Speaking of Ansel, the trailer for The Goldfinch, starring him, Nicole Kidman and Sarah Paulson, dropped today. That was one of those books I read because everyone kept gushing over it, but I found it a bit of a slog. But if you like long and very detailed passages about the art of woodworking, it’ll be your jam.