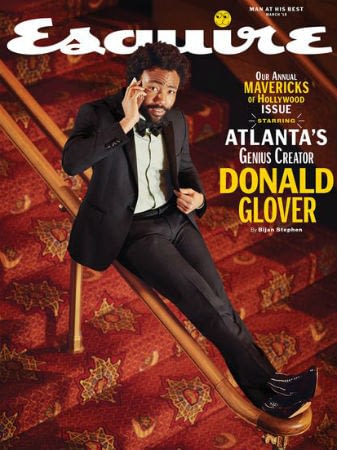 –Donald Glover covers Esquire’s March issue. The interview is a bit dour but the photos are

-His EW interview is much better, in which he talks about how the wardrobe helped him get into character when playing Lando in the new Star Wars movie.

-I’ve been rooting for an Alias-style return to TV for Jennifer Garner for YEARS, but a comedy from Girls creators Lena Dunham and Jenni Konner is not what I had in mind.

-90201’s AnnaLynne McCord dished on all the animosity between her and Shenae Grimes during the show’s run. “When you’re that young — Shenae was 18, I was 20 — we got this crazy show that had so much hype around it and our egos were out of this world.”

-In a new clip from his Netflix interview with David Letterman, George Clooney talks about how Amal changed his life. “I felt that I met someone who I would absolutely trade my life for. I met someone that her life meant more to me than my life, and I’d never had that experience before.”

-Terrible: Jill Messick, Rose McGowan’s former manager, has died by suicide at age 50. Her family issued a seeting statement implicating the Weinstein press cycle, saying “seeing her name in headlines again and again, as part of one person’s attempt to gain more attention for her personal cause, along with Harvey’s desperate attempt to vindicate himself, was devastating for her.”

-This is an excellent look back at Michael Bay‘s dismal treatment of Megan Fox.

-Just when I thought I couldn’t love Julianne Moore more comes this story about how she once defended Alicia Vikander from a crude joke on set. Recalls Vikander “Julianne turned to him and said, ‘If you ever do that again, I’m walking out of here and I’m not coming back.’ She was just, like, ‘Don’t you f—ing say that again.’ It showed me that she had the power. And that meant so much to me.”

–Drake paid for everyone’s shopping at a supermarket in Miami to the tune of $50k.

-The #WhatBlackPantherMeansToMe trend (and the inspiration behind it) is amazing.

-You know, for a movie the studio is trying to bury, Annihilation is getting pretty stellar early reviews.

–Mo Ryan added up all the writers & directors who’ve ever been hired to work on a Star Wars film. The creative roster is 96% white men.

-On last night’s Big Brother, Omarosa talked about what it was like working for Trump. “I was haunted by tweets every single day. Like, what is he gonna tweet next?…It’s going to not be okay. It’s not.”

–Amy Schumer debuted the I Feel Pretty trailer on Ellen’s show, and I love the premise and the supporting cast (Busy Phillips, Aidy Bryant, Michelle Williams, Sasheer Zamata). It’s about a woman with low self-esteem who wakes from a head injury believing she is the most beautiful and capable woman in the world.

-The Killing costars Joel Kinnaman and Mireille Enos are re-teaming for a new series from Amazon, which I kind of love.

-The first Venom teaser trailer with Tom Hardy debuted and oof — it’s not great. Super generic and boring looking. And did they stick Nicole Kidman‘s terrible Big Little Lies wig on Michelle Williams? And they don’t even show Venom in costume! The fact that Sony is trying to make a movie about a Spider-Man villain but can’t actually use Spider-Man is a mess. (Also, I saw someone on Twitter say that Tom Hardy’s voiceover sounds like it was done my Terrance Howard, and now that’s all I can hear…)