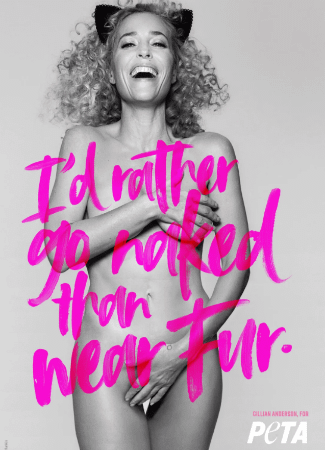 -The last time Gillian Anderson stripped down for an animal rights campaign, she posed with a gross, giant eel. The cat ears in her new campaign are a welcome twist.

–Quincy Jones‘ Vulture Q&A is astoundingly entertaining. He snipes about what bad musicians The Beatles were (“Paul was the worst bass player I ever heard. And Ringo? Don’t even talk about it”), and dishes about dating Ivanka Trump (“She had the most beautiful legs I’ve ever seen in my life. Wrong father, though”).

-Ellen turned Milo Ventimiglia‘s appearance on her show into a wet tshirt contest, and I’m not complaining.

-Meanwhile, Michael B. Jordan told Ellen that he “barely had a social life” while filming Black Panther.

-Is it getting weird that Bryan Fuller can’t seem to stick to a project these days?

–Jennifer Aniston gave Architectural Digest a tour of her $21 million dollar home. I’m not sure if I’m still recovering from seeing pics of Hilary Duff and Mindy Kaling’s odd design choices,  but I’m really liking this. It looks like people actually live here.

–Sarah Jessica Parker (who looks amazing these days) couldn’t keep it together when playing Mad Libs with Jimmy Fallon.

-The Spice Girls officially announced a reuion tour. Say you’ll be there!

–Tom Cruise shared a look at the helicopter stunt from his new Mission Impossible and it’s insane. He flew the damn thing himself!

-The closer we get to the Oscars, the more articles I’m seeing about how Three Billboards is a problematic mess. I like it but I also kinda agree?

–Harrison Ford was a covert adviser to Solo: A Star Wars Story, giving advice and backstory to Alden Ehrenreich. I’m so intrigued by how this is going to turn out, seeing as there’s been lots of talk of Ehrenreich needing hand-holding and acting coaches to play Han.

-The first Deadpool 2 trailer delivers our first look at Josh Brolin as Cable.

-The ghosts of the past come back in the new Jessica Jones trailer, which looks so, so good! This is how you cut a trailer, Hollywood.

Leighton Meester Is Not Interested in a Gossip Girl Reunion