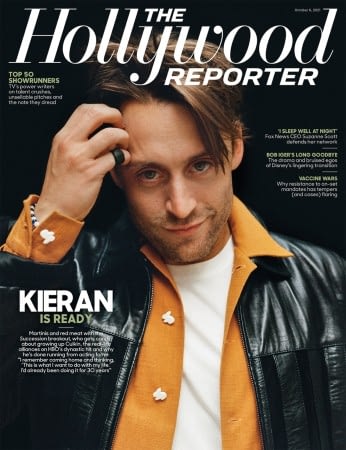 –Kieran Culkin‘s THR cover story is delightful. He opens up about his strange celebrity childhood, his fears about fame, and why everyone on the Succession set loves Sarah Snook.

-I liked this interview with Julianna Margulies on joining The Morning Show. “I went to Sarah Lawrence college. I think if there isn’t a better place to learn about what being gay is, I don’t know.”

-This article about Matthew Rhys on a boat is so very charming.

-Oh god. THR’s new story on how Hollywood is divided on vaccines includes a bit about how Letitia Wright, who is currently reprising her role as Princess Shuri in Black Panther: Wakanda Forever as it films in Atlanta, has reportedly continued to express anti-vaccine skepticism on the set of the film.

–Britney Spears‘ boyfriend Sam Asghari seems to be encouraging her that she return to the stage. Should she, though?

–Emily Ratajkowski says the story about Robin Thicke allegedly groping her while shooting the Blurred Lines video was “frustrating” because that passage from her book “was leaked” against her will. “I feel like it just turns into a clickbait frenzy, and all of a sudden words like ‘sexual assault’ and ‘allegations’ are getting thrown around rather than people reading the actual essay, so, again, I’m just looking forward to when people will be able to hear things in my own words.”

–Diplo may face criminal charges for sexual misconduct stemming from allegations in an October 2020 police report.

-A judge ruled that Charlie Sheen no longer has to pay child support, which ‘blindsided’ Denise Richards, according to her camp.

-Fans are going nuts about the Real Housewives of Beverly Hills reunion trailer.

–Jake Gyllenhaal was talking about shooting sex scenes with Jennifer Aniston in The Good Girl and explained that for intimate scenes, a pillow was placed between the actors. “The pillow technique was used. That was just preemptive and used generally always when actually in a horizontal place in that movie…I think that was actually a Jennifer suggestion. She was very kind to suggest it before we began. She was like, ‘I’m putting a pillow here.'” Smart!

-Squid Game’s Jung Ho-yeon has just been named a Global House Ambassador for Louis Vuitton. I love her and want only good things for her.

-Meanwhile, this Halloween’s hottest costume is the Squid Game jumpsuit.

-According to reviews, Michael Keaton and Kaitlyn Dever will break your heart in Dopesick, Hulu’s harrowing drama about the origins of the opioid crisis in America. It looks so good, and yet I don’t think I have it in me to watch something that dark right now.