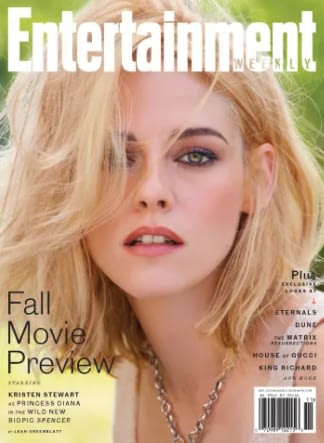 –Kristen Stewart covers EW’s fall movie issue and talks about the growing Oscar buzz surrounding her (“You want to win, we’re all animals. Artists want to engage with the world and have larger conversations. Even though it doesn’t seem like I’m somebody who wants to be extremely famous, I still want this conversation to be expansive”) and being more choosy (“I used to be really intentionally the opposite of precious in terms of choosing projects. For a minute there I was like, ‘I’ll do f**king anything!’ And honestly, it was a good place to be for a minute. But I think now I’m going to be a little more careful. I think I have a better nose for what’s going to be fruitful for me personally, as an experience, if not necessarily what’s going to thrive out in the world”). Also, this is a very non-EW photo shoot and I love it, especially the video that opens the story.

–Shakira reflects on her participation in the Super Bowl 2020 halftime show in Cosmopolitan’s November issue.

–John Boyega walks GQ through his fashion choices: “I’ve worn everything from Louis Vuitton catwalk looks to traditional Nigerian dress… I’m still trying to work my style out, I’m incredibly curious to see where it can go and how far I can push it.”

–Kirsten Dunst and Jesse Plemons opened up their house to Architectural Digest and I’m swooning!

–Shannen Doherty says it wasn’t long after she learned her breast cancer had recurred that she took the job on the 90210 reboot and only Brian Austin Green knew about it.

–Angelina Jolie just sold her stake in a French château and winery business to a third party, capping a yearslong fight in which she and her ex-husband Brad Pitt battled over its future. Ok, but can I still get its delicious, delicious rosé?

-This is lovely: Wayne Brady is co-parenting his ex-wife and her boyfriend’s new baby. “He’s gonna call me Duncle (Daddy/Uncle) because I plan on being around and doing all that stuff.”

–Kacey Musgraves confirmed that she really was naked during her SNL performance last weekend.

-How excited are people for new Adele music? This new clip to announce a single will drop on Oct 15 got over 9 million views.

-Speaking of new music, Mitski is back!

–Drew Barrymore weighed in on the fight between Lucy Liu and Bill Murray on the set of the 2000 movie Charlie’s Angels. “What really happened was Bill was just in a—you know, comedians can be a little dark sometimes, and he just came in in a bad mood. And what you have to know is how much Lucy stood up for herself and that was the great thing that came out of an unfortunate circumstance. She literally said, ‘I do not accept that kind of behavior from you.’ And we all supported her and backed her up and we moved forward.”

-HBO revealed that the new Sex and the City sequel series will premiere in Dec.

-The creator of Squid Game is open to a second season, but it would require a lot of time and someone other than him doing all the writing.

-An LA Law sequel starring Blair Underwood has been ordered by ABC, with more original cast members expected to return.

-Aw man, I don’t watch The Resident but it sucks for fans when a main actor leaves a show without being given a proper goodbye and they have to use a clips montage.

-Judging by this new clip, it looks like Succession’s third season will pick up moments after the season 2 finale, with Kendall dealing with the aftermath of his bombshell press conference. (Karolina‘s expression when she says “Ok” to Cousin Greg is priceless.)

-Also, the reviews for the new season are glowing.

–John Cena is the butt of all the jokes in first clip from HBO Max’s Peacemaker series.

-Here’s the first teaser for the Game of Thrones prequel series, House of the Dragon, that’s due next year. There’s a weird lack of dragons in this clip.