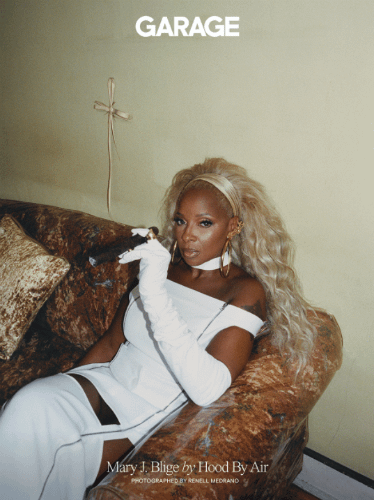 –Mary J Blige looks amazing in Garage magazine. She says in the interview: “What propels me is being able to get through the hard times, and rejoicing when something major happens. It’s not just about making it through, but coming out strong. Fitter, better, and stronger.”

-Poor Chrissy Teigen and John Legend. I’m horrified by all the flak she’s getting about sharing details about her miscarriage online. It happens to 1 in 4 pregnancies and there’s still such a stigma about talking about it. Most celebs only share sanitized, idealized peeks into their fabulous lives. What she’s doing right now is heroic, and all the haters and conspiracy wackos who are bullying her today are a disgrace.

–This thread from a writer who once did a cover story on Paul Rudd makes me want to spend the day with Paul Rudd (more so than usual).

–Hugh Jackman wears nothing but boots in this cheeky new commercial.

–Michaela Coel and Donald Glover interview each other in GQ, and Glover reveals the birth of his third son with partner Michelle White.

-Congrats to Nicki Minaj, who welcomed her first child yesterday.

–Chris Rock told Ellen Degeneres that Dave Chappelle’s live “Summer Camp” shows featured a lot of weed and mushrooms. “Tiffany Haddish drank the mushroom tea and cut her hair the next day. I know she likes to act like, ‘Oooh, Common told me he loved me with no hair.’ No no, it was the mushroom tea talking.”

–Charlie Carver, who’s been in Teen Wolf and Desperate Housewives, says a gay man who he’d worked with previously slapped him at an Emmy party in 2015 for being too gay around “people in the business.”

–Fleetwood Mac is seeing a huge boost in sales after a TikTok of a guy on a skateboard drinking cranberry juice and singing “Dreams” went viral.

-This is an interesting piece on how Amazon’s Utopia, which stars John Cusack and Rainn Wilson, shouldn’t have been released in 2020 due to its pandemic-related conspiracy theories and anti-vax bent. I didn’t even give it a shot after TV critic Alan Sepinwall tweeted that he’d “tapped out after 3 fetishistically violent eps.” Between this, The Boys, Lovecraft Country and the new season of Fargo, TV right now feels ultra violent and gory, and I have no desire to watch any of it.

-Just because 2020 can’t get any weirder, Cameron Diaz‘s 2011 film Bad Teacher is the top movie on Netflix.

-Universes colliding: Jamie Foxx, who played Electro in an Andrew Garfield-led Spider-Man movie, is back as the classic villain in the latest Spider-Man sequel, starring Tom Holland.

–Lenny Kravitz covers a lot of ground in his upcoming memoir — but not the 2015 performance where we accidentally saw his junk.

-Give me all the stories about TikTok houses imploding.

-The Borat sequel just got an official title (Borat Subsequent Moviefilm: Delivery of Prodigious Bribe to American Regime for Make Benefit Once Glorious Nation of Kazakhstan), synopsis (Borat is looking to marry off his daughter to Mike Pence) and trailer (below).