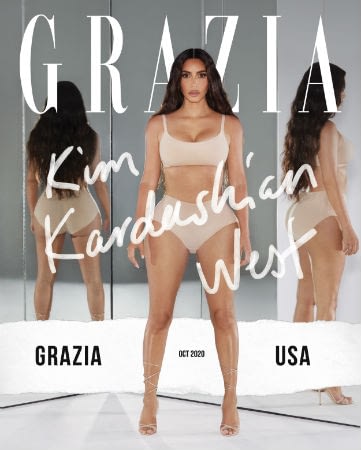 –Kim Kardashian covers the first issue of Grazia USA and reveals that Kanye West contracted covid around the time Tom Hanks had it. “Kanye had it way at the beginning, when nobody really knew what was going on. It was so scary and unknown. I had my four babies and no one else in the house to help. I had to go and change his sheets and help him get out of bed when he wasn’t feeling good. It was a challenge because it was so unknown. Changing his sheets with gloves and a face shield was really a scary time.”

–Chris Evans managed to squeeze in a Trump insult and a thirst trap all within the last 24 hours. Bless.

–Rihanna apologized for using a song that included sacred Islamic verses during her lingerie fashion show. As apologies go this was a very good one — though probably should have gone on her feed rather than her stories.

–Jennie Garth and Tori Spelling are calling BS on Jessica Alba‘s no eye contact claim on the 90210 set. The best part about her claim is that I haven’t seen this many rumours surface about Alba’s terrible behaviour since when she was shooting Dark Angel. Did she Streisand Effect herself?

-The mother of Katie Holmes‘ new boyfriend is reportedly not thrilled that he dumped his fiancée of 18 months to be with her.

-The Good Place’s William Jackson Harper wrote a disturbing thread about being blocked by the government from screening Malcolm X at military academies.

-I liked The Haunting of Hill House but for some reason never watched the last episode. I should catch up because the follow up, The Haunting of Bly Manor, starts this week and is getting good reviews.

–Tyra Banks read out the wrong bottom two names on live TV during Dancing with the Stars last night. To make matters worse, they put her in this outfit.

–Marc Maron is pushing for Netflix to wrap up Glow in a 2-hour movie and I would love this, especially since it ended in such a weird place. It feels like a lot of people are getting gun-shy about starting new Netflix series, knowing that they will likely be cancelled mid-flow.

-Is Chris Pratt actually mocking celebs who urge people to vote? In this economy??

–Mandy Patinkin‘s anti-Trump video is a work of art.

-This is a very good, very bleak read on the growing crisis facing movie theaters big and small.

–Jessica Chastain, Lupita Nyong’o, Diane Kruger, and Penélope Cruz team up to stop WWIII in the trailer for The 355. I’m very into this.