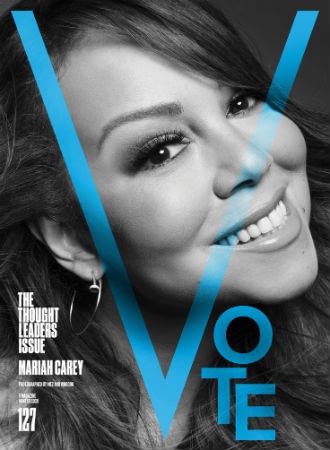 –V Magazine released a series of covers with Mariah Carey, Taylor Swift, Jaden Smith, Chris Evans, Janelle Monae, Jennifer Lawrence, Halsey and more, in which they break down why they’re voting. Carey said “We’ve been socialized to believe that poverty is a personal failure rather than our systems failing us.” Meanwhile, Swift didn’t just tell people to vote; she told them she’s voting for Biden. (She even made cookies.)

-Meanwhile, Dwayne “The Rock” Johnson surged past the 200 million follower mark on IG after endorsing Biden, so it’s not exactly career suicide.

-Watch the West Wing cast reunite and recreate the ‘Hartsfield’s Landing’ episode from season 3 in the trailer for an upcoming special benefiting When We All Vote. This gave me chills. That show petered out in the end so you almost forget how very good the first few seasons were.

–David Foster (who is 70) and Katherine McPhee (who is not) are expecting their first child together.

-Finally, Tory Lanez has been charged with assaulting a woman (presumably Megan Thee Stallion, who claims he fired a gun at her as she exited a car, resulting in injuries to her feet that required surgery).

-If you follow Deux Moi (and who doesn’t during quarantine?) then you’ll have seen all the sightings from the past 24 hours of people claiming to have witnessed Noah Centineo and Stassie Karanikolaou getting engaged/eloping in Vegas.

-Of all the TV shows that I want an oral history about its behind-the-scenes shenanigans, nothing beats The Vampire Diaries (followed closely by The Good Wife). The whispers about what went down on that set are legendary. Now, former costars Paul Wesley and Matt Davis are duking it out on Twitter over politics. (Davis already has a, um, questionable reputation.)

-I love that celebs who are “remotely attending” fashion shows just seem to be throwing on every piece they own from that designer. Here’s Marion Cotillard at Chanel, and Euphoria’s Storm Reid at Miu Miu.

-There’s an urban legend that Princess Beatrice once pretended to knight singer James Blunt with a sword, but instead sliced Ed Sheeran across the face. Turns out Sheeran’s manager says it’s true — and she hasn’t spoken to him since.

-The Academy Awards have introduced new rules allowing movies to be eligible if they’ve screened at drive-ins. Which is very smart because there’s no way theatres are staying open in the major markets this xmas.

-This is a fascinating look at how Alex Gibney pulled off a secret exposé of America’s COVID-19 failures in five months.

-With Tony Stark out of the picture it seems Peter Parker needs a new mentor — and Doctor Strange is stepping up. Benedict Cumberbatch will reprise the role in the next Spider-Man film.

-The “unrenewal” trend continues: Showtime has cancelled Kirsten Dunst‘s show On Becoming a God in Central Florida, despite renewing it for Season 2 last September. When Showtime (who never cancels anything) gets in on the trend, you know TV is screwed.

–Selena Quintanilla‘s life story will be streaming on Netflix in December. Check out the trailer.

-The Princess Switch: Switched Again is coming to Netflix Nov 19, with Vanessa Hudgens set to return as 3 look-alikes. I can’t wait to see how long they can keep this franchise going…

-Here’s the trailer for David Fincher’s latest film Mank, a biopic of Citizen Kane screenwriter Herman Mankiewicz, which is coming to Netflix.